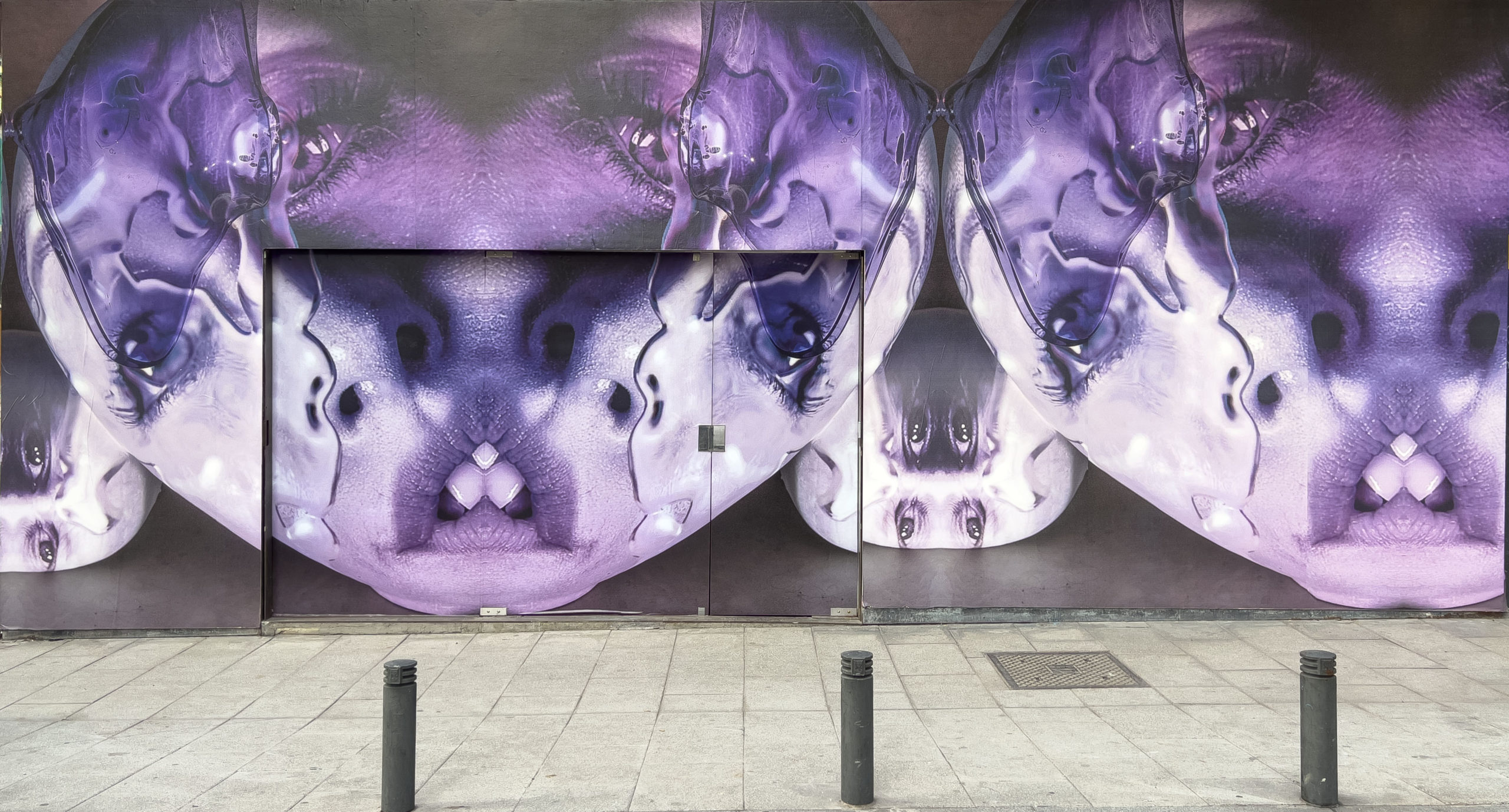 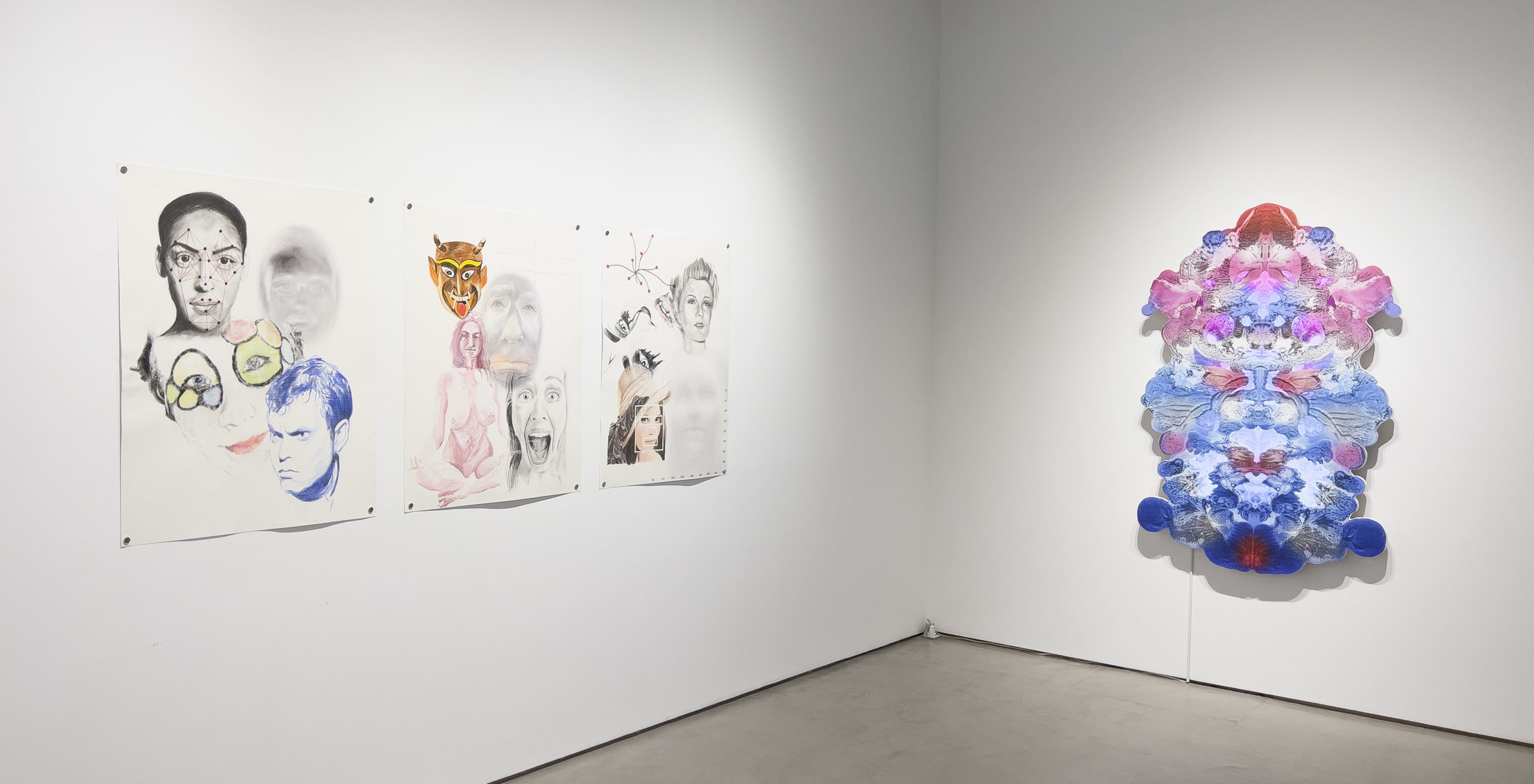 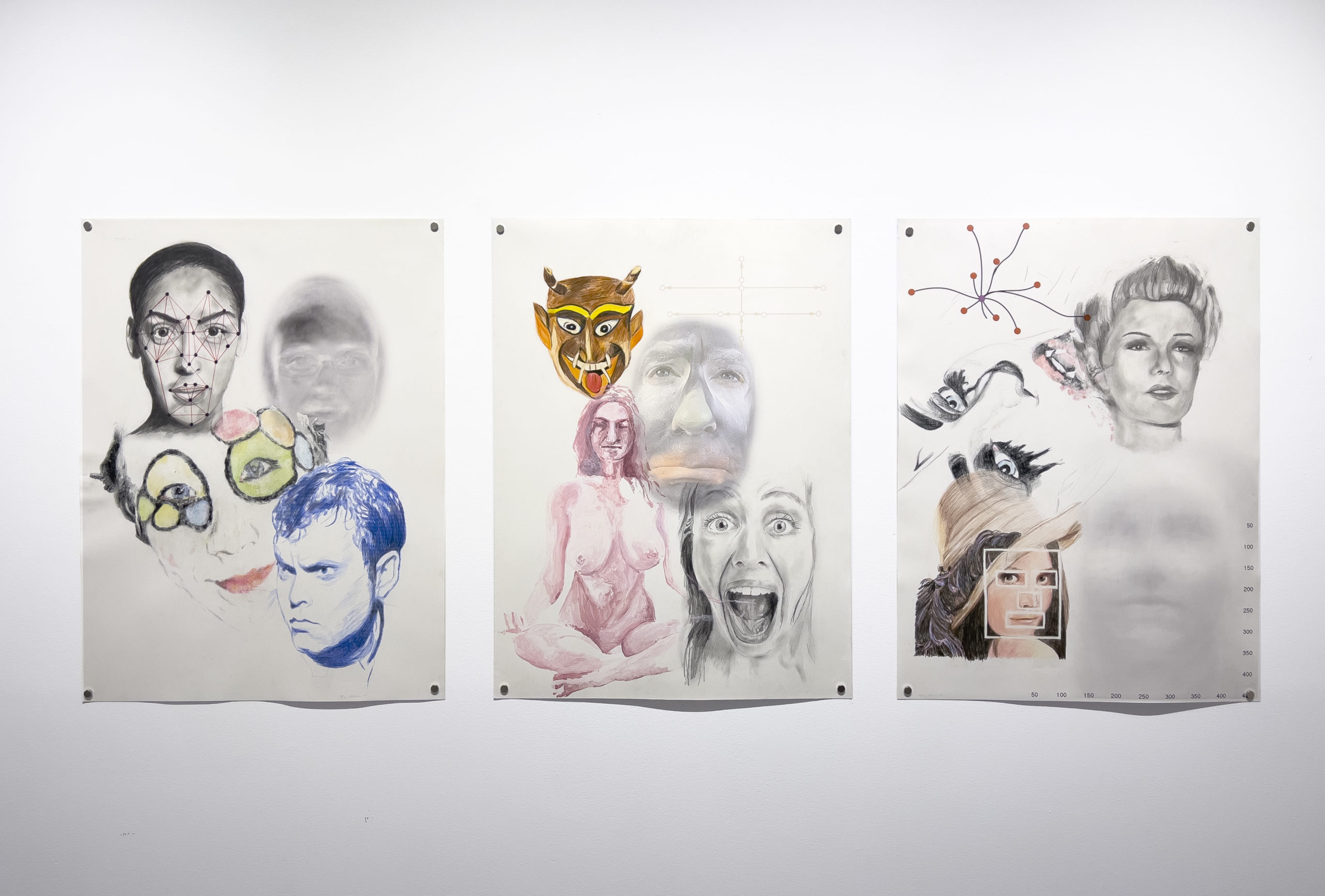 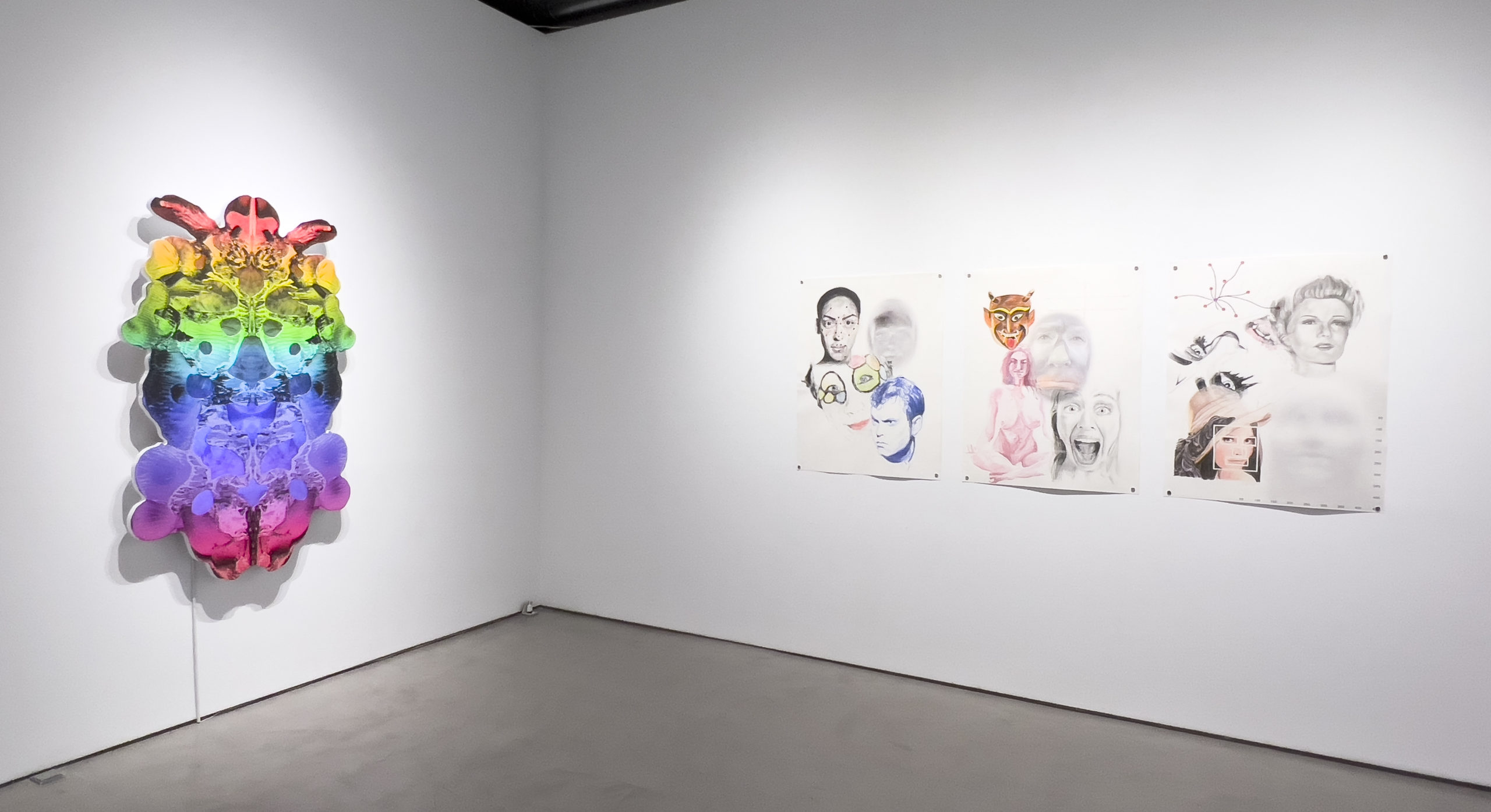 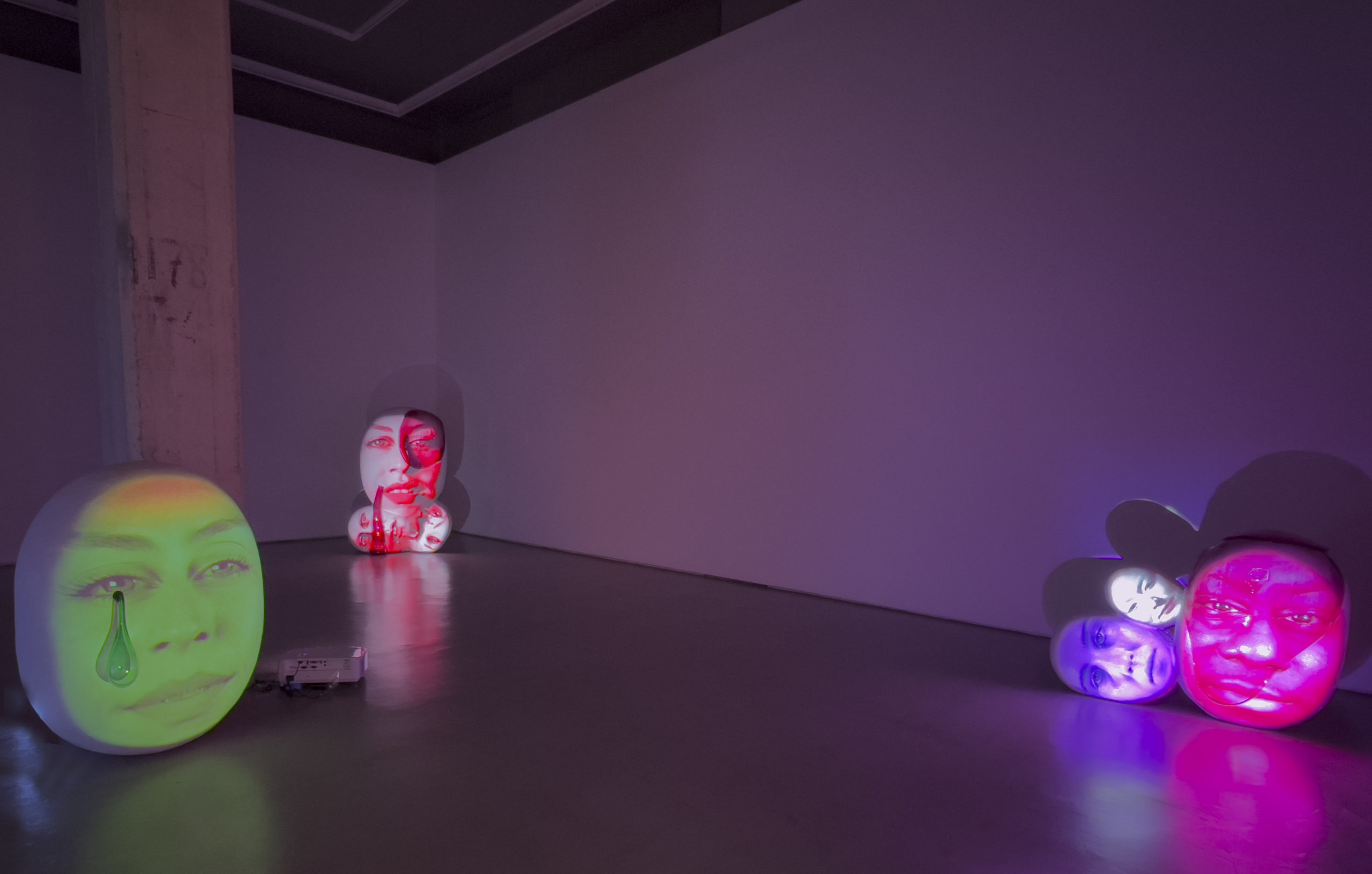 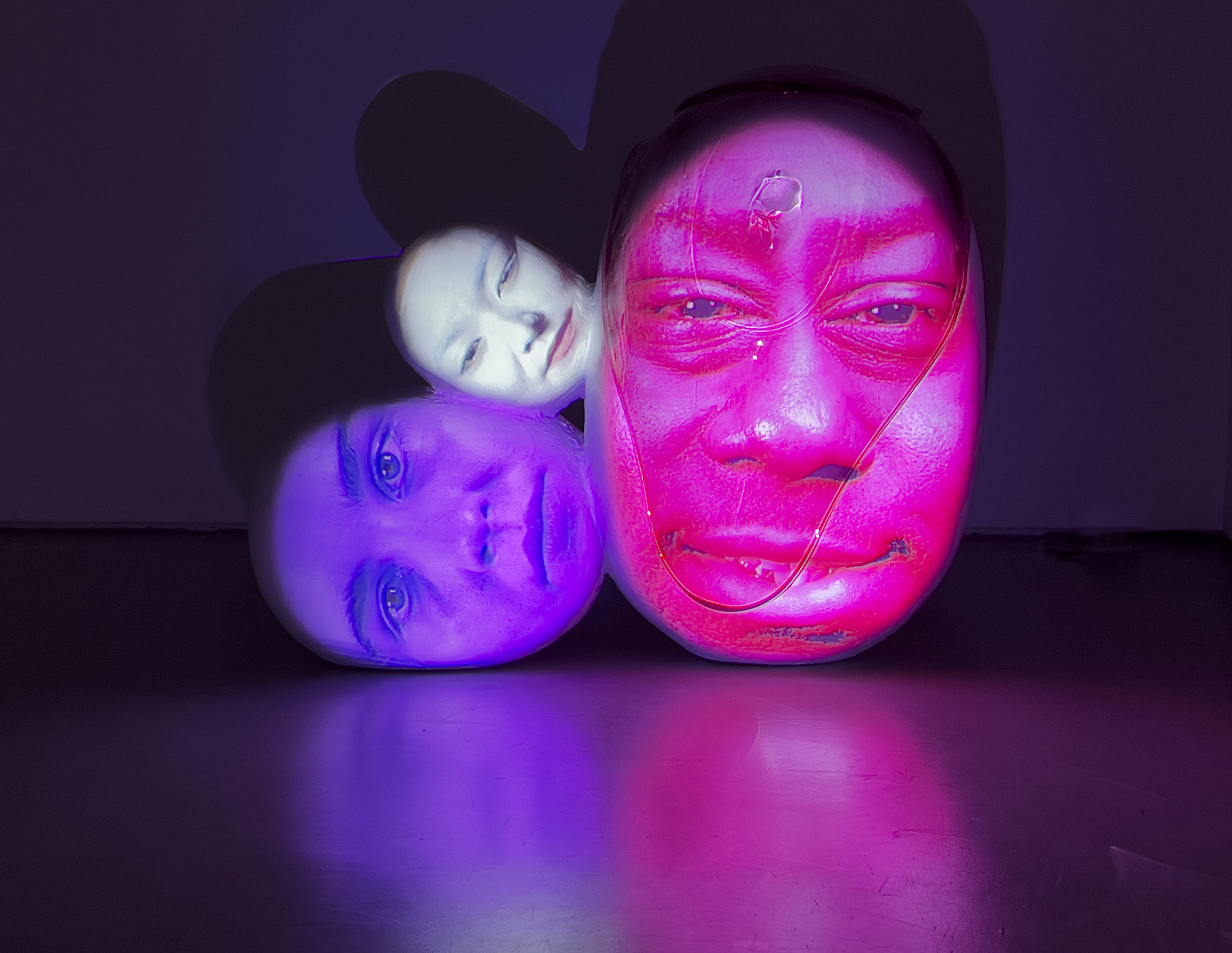 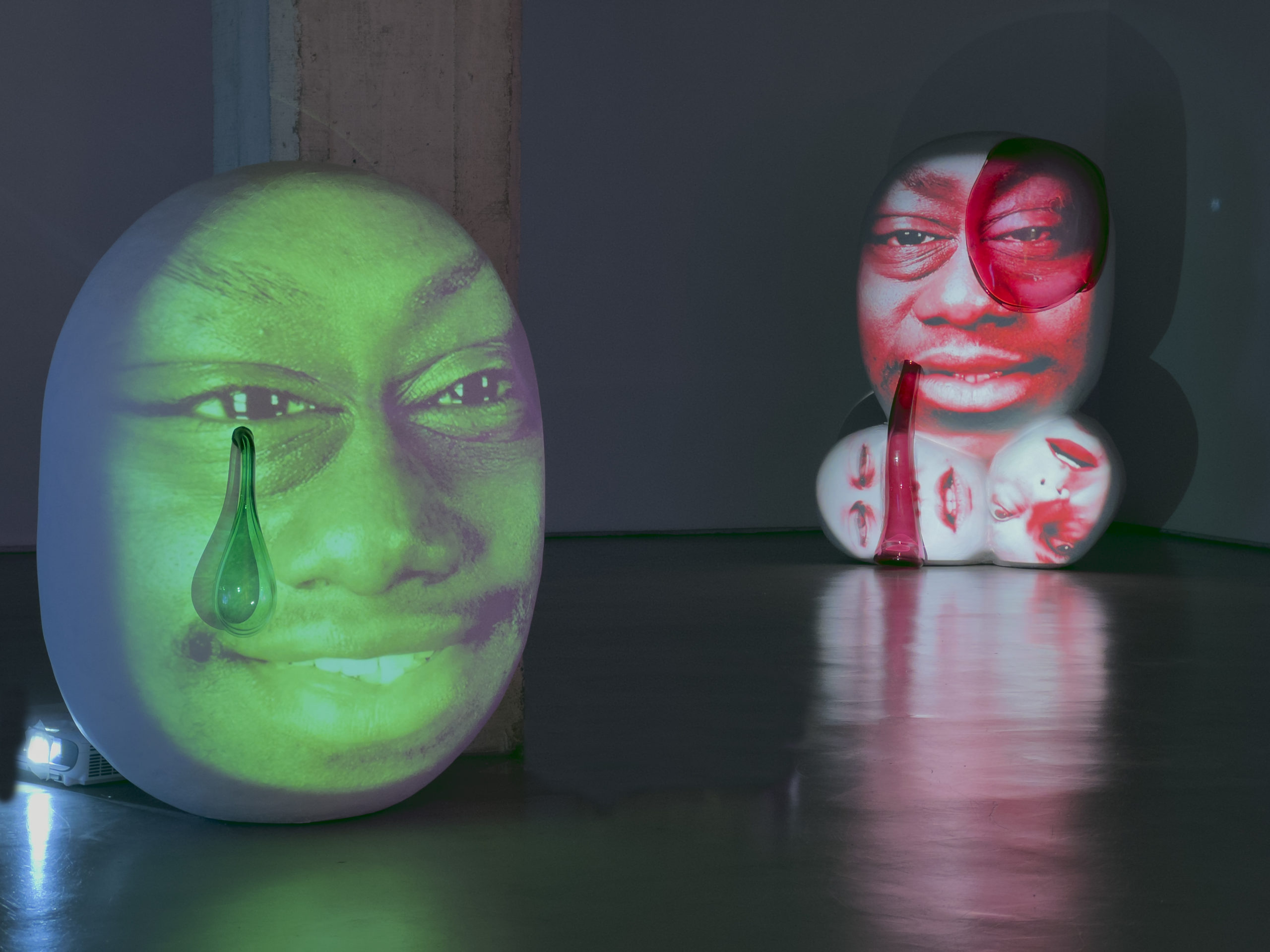 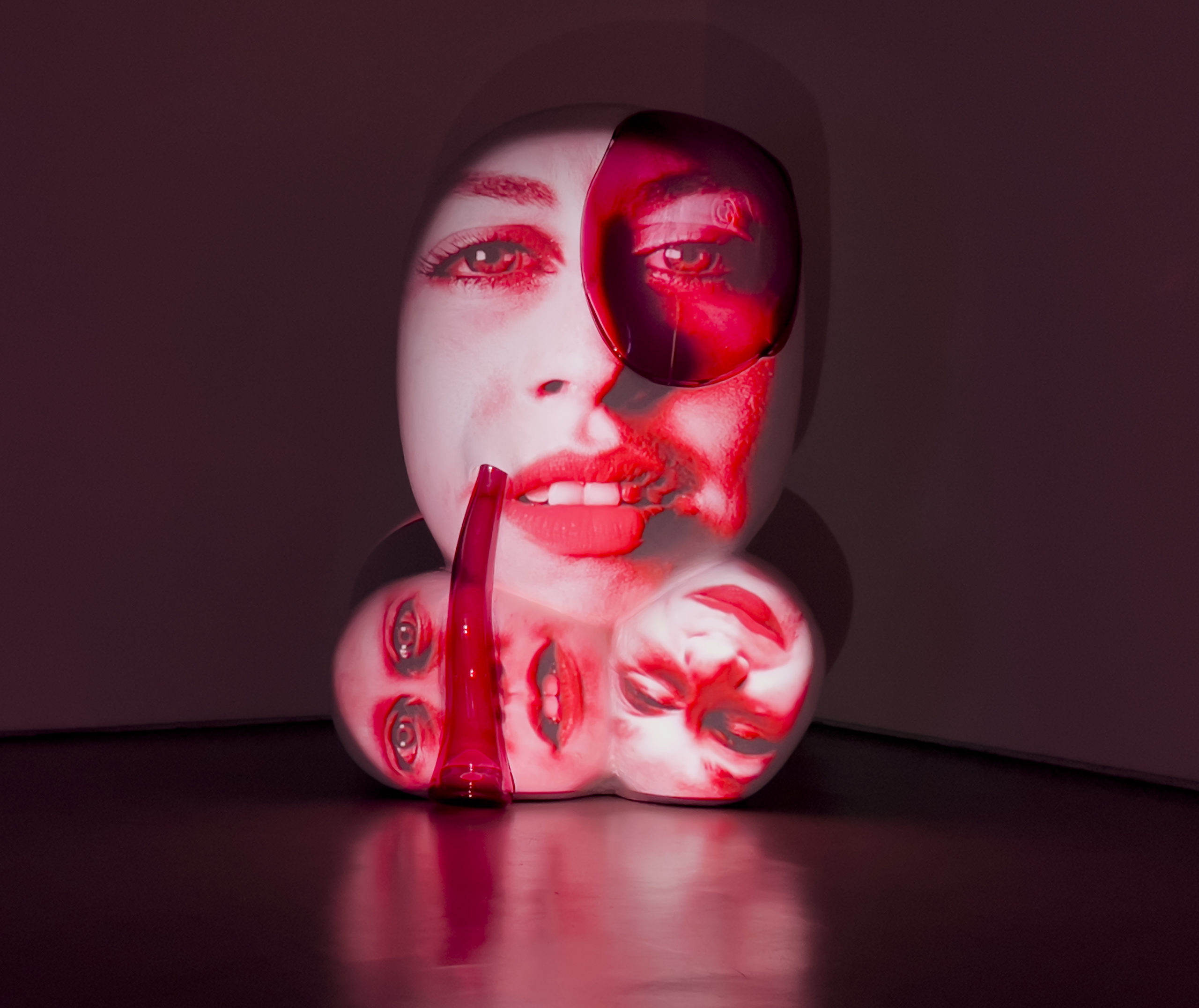 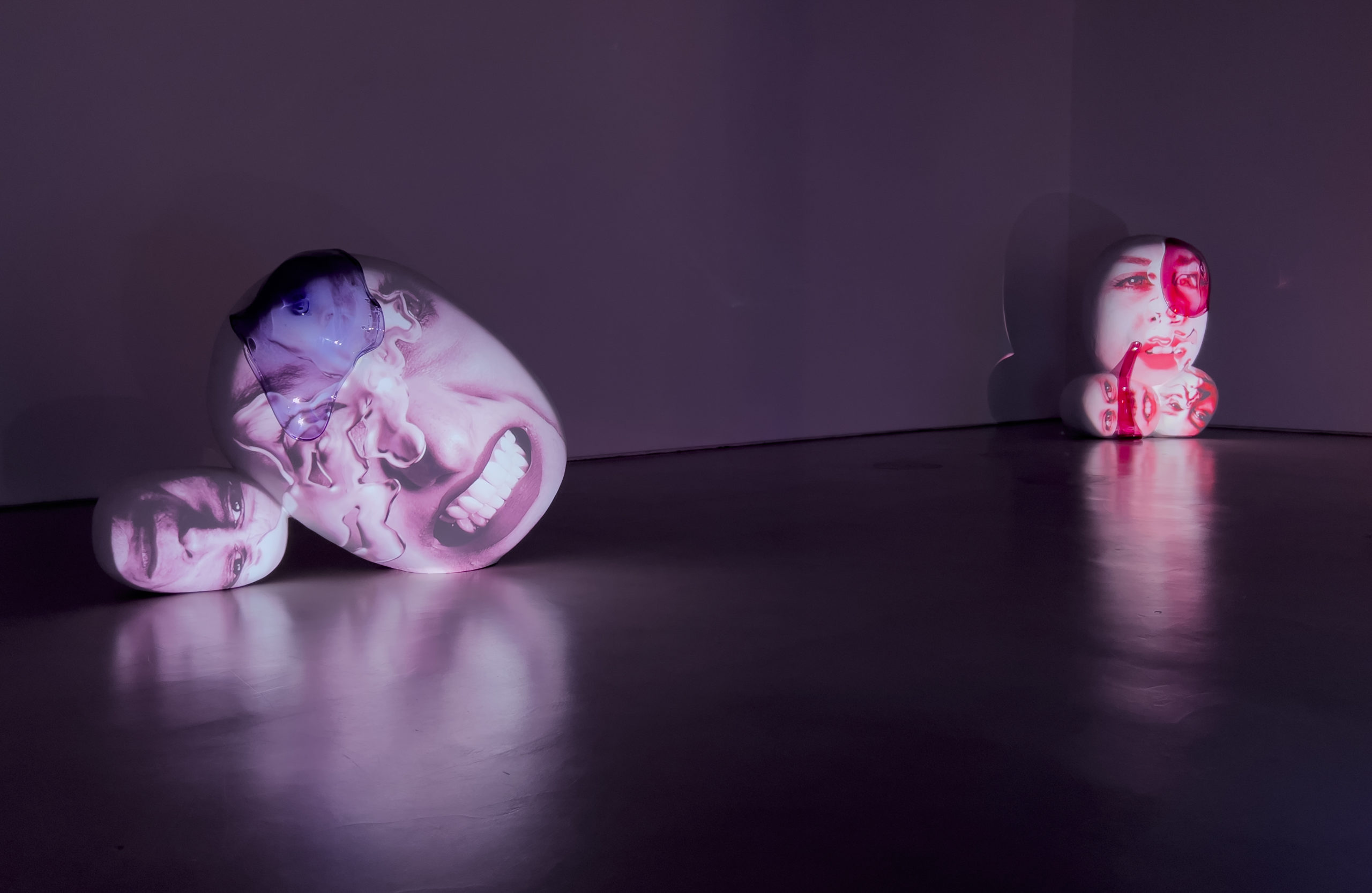 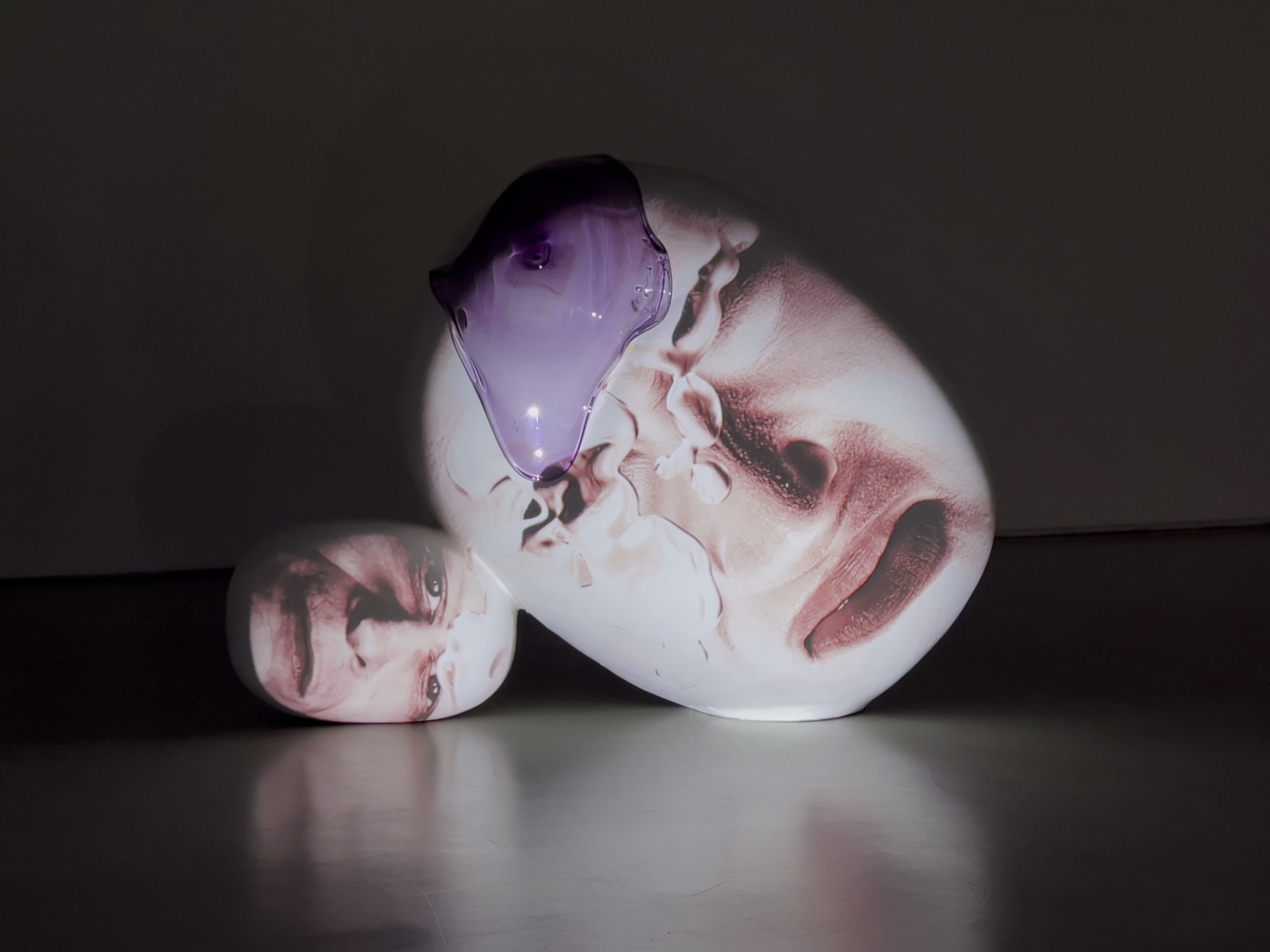 Pareidolia and other problems.

MPA Gallery / Moisés Pérez de Albéniz is pleased to present Tony Oursler’s second exhibition at the gallery, titled “Pareidolia and other problems”. A pioneer in the creation of video art since the 1970s, he has always been rooted in the world of cinema, discovering immersive projects with technologies reminiscent of magic lanterns, the camera obscura, and parlor tricks while also investigating identity, facial recognition, and image production. For this occasion, we have a dialogue between Jordi Rigol and Tony Oursler about his recent work and some of his more international projects.

This will be the second show with Galeria MPA, but you have been present in Spain with several solo exhibitions since the ’90s. “Pareidolia and other problems” is the title of the show, but the word itself is a very interesting and confusing concept that could take the spectator to look at the world with another eye. What is pareidolia to Tony Oursler?

Pareidolia has to do with the fundamental perceptual apparatus that has evolved deep within the brain. Of course, recognizing faces has always been of primary importance to the group. To distinguish instantaneously a friend from a foe, family from a stranger, is of obvious evolutionary importance, but how does this part of the brain operate today in terms of technology and the endless feed of images? I thought this was a good entry point for the exhibition. Pareidolia is connected to pattern recognition. The part of the brain that picks out the elemental features of the face is the same part that allows us to recognize signal within noise, the idea within the chaos, the essence of problem-solving. It is also a hyperactive part of the brain, which I have enjoyed quite a bit, as I have always seen faces in patterns. Seeing faces where they don’t exist also connects us to a hallucinatory process which can give us both insight into problematic states of mind and the creative fountain of youth. Specifically in this exhibition, I have tried to engage with this part of the audience’s brain, using art as an alternative to drugs, a kind of melting and unmelting of the mind. In Spain, this statement has a long history going back to artists like Dalí that famously said: ” I don’t need LSD, I am LSD “. Here, we have used computers to melt and unmelt presences, as well as the process of glass blowing, which in its core, is a play between liquid and solid as an optical representation of transformation.

The importance of water and its properties, I believe, is essential to some of the works present in the show. This is something that you stated in a text released for your exhibition “Water Memory” at the Guild Hall, East Hampton in 2019. That exhibition brought us examples like those on the origin of homeopathy, the discovery of HIV by Dr. Montaigner in 1983, or the “war water” rituals performed by the Hoodoo religion. According to the information included in your text, water deities and gods lived once in rivers and fountains with a specific narrative. Do they do so in your sculptures?

Some of the works of the current exhibition were made simultaneously as those for the Water Memory exhibition at Guild Hall. Around that time, I wrote an essay, “On Water & Magical Thinking” which was given out to the audience as a zine at the exhibition. The text takes the elemental substance of water as a means of exploring our tendency to drift into a state of magical thinking, whether it be the alchemical understanding of water; the pseudoscience of homeopathy; or Franz Mesmer’s banquet, which was filled

with water as a means of expressing his theories of animal magnetism. My interest in magical thinking is not necessarily taking the position of the debunker, although I think this is very important as it is highlighted recently in terms of the anti-vax movement. I’m more interested in the creativity involved in taking a leap of faith, connecting the dots that would not be connected otherwise. For example, Mesmer is seen as a quack but is also credited as the founder of analysis. I’m interested in the mistakes as well as the victories. Mesmer was also responsible for the articulation of the placebo effect, brought to light at his trial. The placebo effect is, of course, crucial for all our endeavors and has an amazingly dark aspect that has become evident through the manipulations of social media. We’re 60% water, and our treatment of this resource has always mirrored humanity. I imagine the sculptures immersed in these dilemmas, and I hope this extends to the audience in the gallery.

The relevance of these myths that unify religion with the narrative was then replaced in the west by the Christian icons, but it is interesting how these stories survived to the authoritative voice of the Church, eroded by the social and scientific method of the Enlightenment. Nowadays, we could state that the individual has just arrived at a more central role in this story, do you agree?

I think what you’re talking about in this question is known these days as “disenchantment”. The Enlightenment centered the individual on the story, but this has sadly been proven to be finely manipulated by monolithic corporate streamlining of the internet, where the illusion of individuality is exploited by the capitalist entertainment complex. But not to digress too much, I think what you’re suggesting here is very interesting in terms of spirituality as well. The book The Myth of Disenchantment by Jason Josephson Storm, lays out a counterargument to the domination of the cold logic of science which traces another history where, for example, so-called “primitive” culture has been preserved in academia through studies of anthropology. One of the subjects which interests me quite a bit these days is the re-enchantment cycles that are now emerging in the culture as a sort of new age movement. I think this will be very important both politically and culturally in the next years. People are striving for greater meaning and reaching out for things like ayahuasca as an alternative. Therefore, I would suggest art can be very important to take a position concerning a very primary human activity, which is creativity. I look to art in the same way that some might look to religion. It’s a means of celebrating the positive aspects of the world and dealing with other forms of trauma as well. I think art “audiences” can be activated to be producers, whether it’s simply taking a course in flower arrangements, or learning to think outside of the box in terms of business or any other enterprise. The art model I think is infinitely expandable if we can avoid divisive politics at the same time.

In your last exhibition, there was a central idea about facial recognition, systems, and technology reading faces applied to our everyday life in airports, surveillance systems, etc. Now we can see two Rorschach paintings (OVO and Vrad) in the show. Is it a game in which you would like the spectator to be involved? Or is it perhaps a way to further explore the different aspects of the face and its emotions?

I like the connection between facial recognition and the Rorschach. That’s a battle between what is human and what is artificial intelligence. That is the game we will be playing in the next twenty years. Of course, facial recognition is the first time that the computer looks at us and portrays human existence collecting all our attributes statistically. Right now, only a few human beings have access to this information in large social media corporations. I expect an explosion of learning and creative insight once these tools are more widely available to the public. Of course, Rorschach exploits the very foundation of human creativity. What we see in abstraction says a lot about who we are, and I’m trying to coax that from the participants.