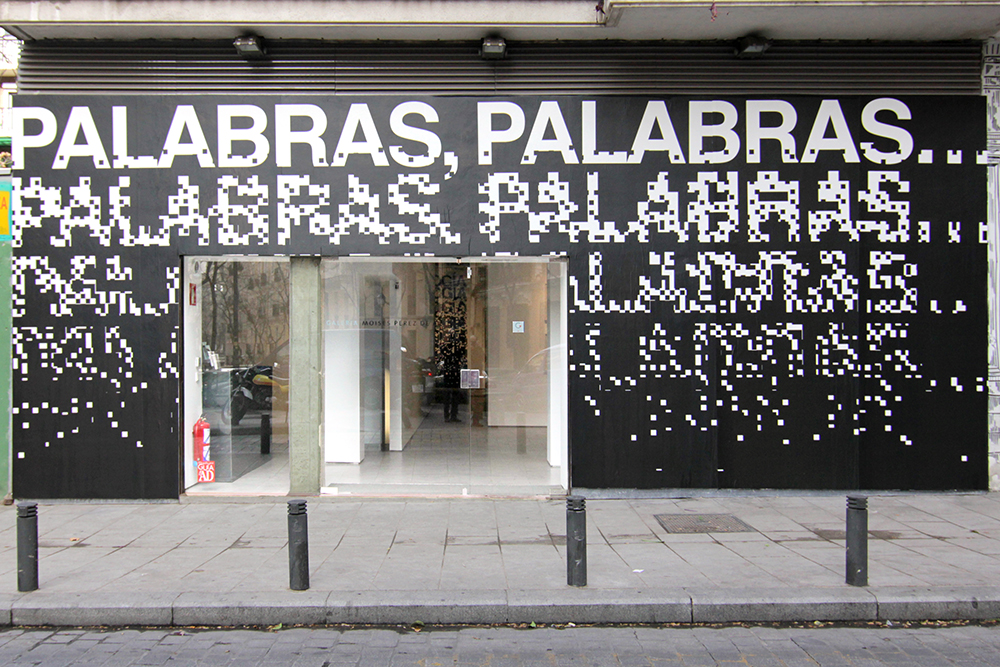 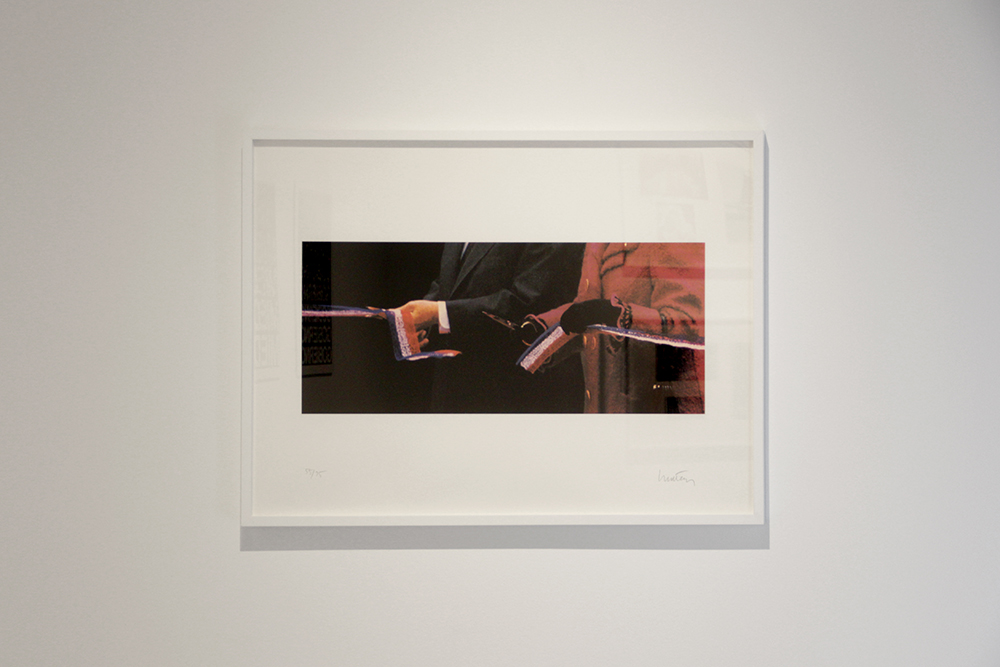 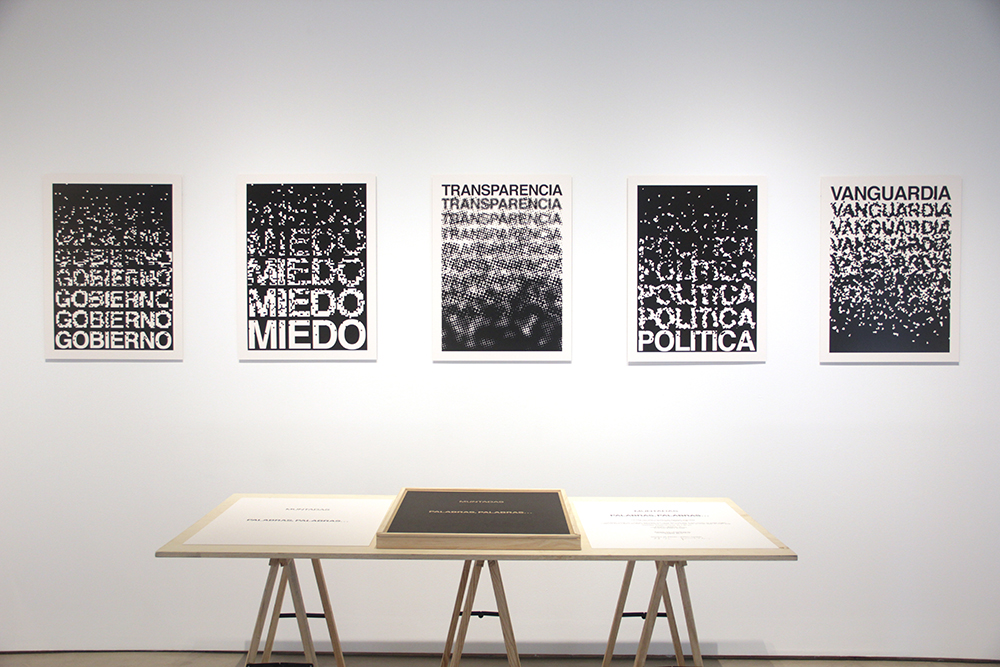 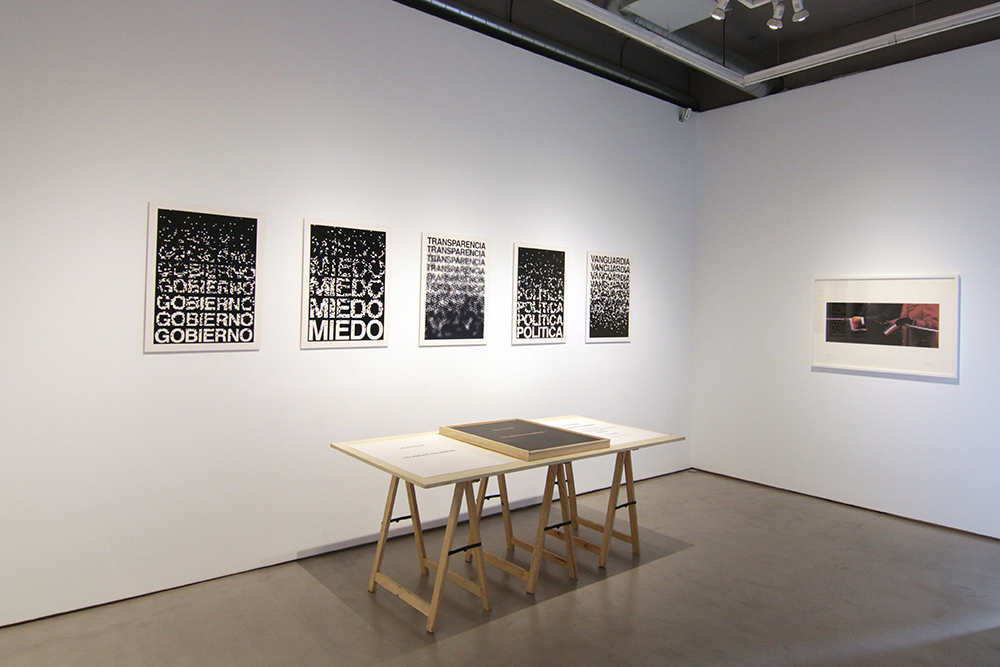 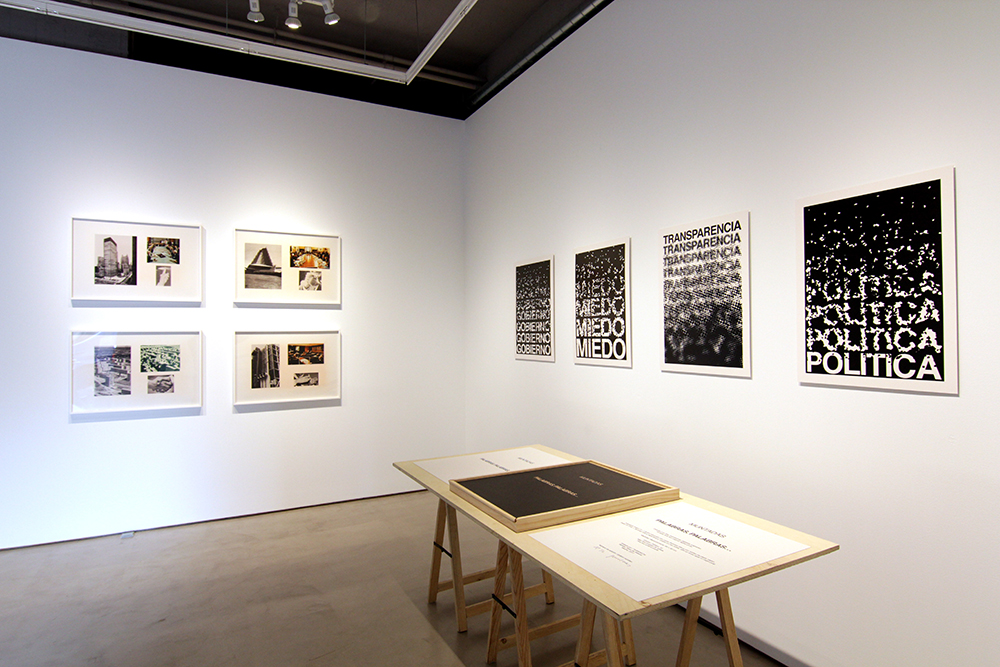 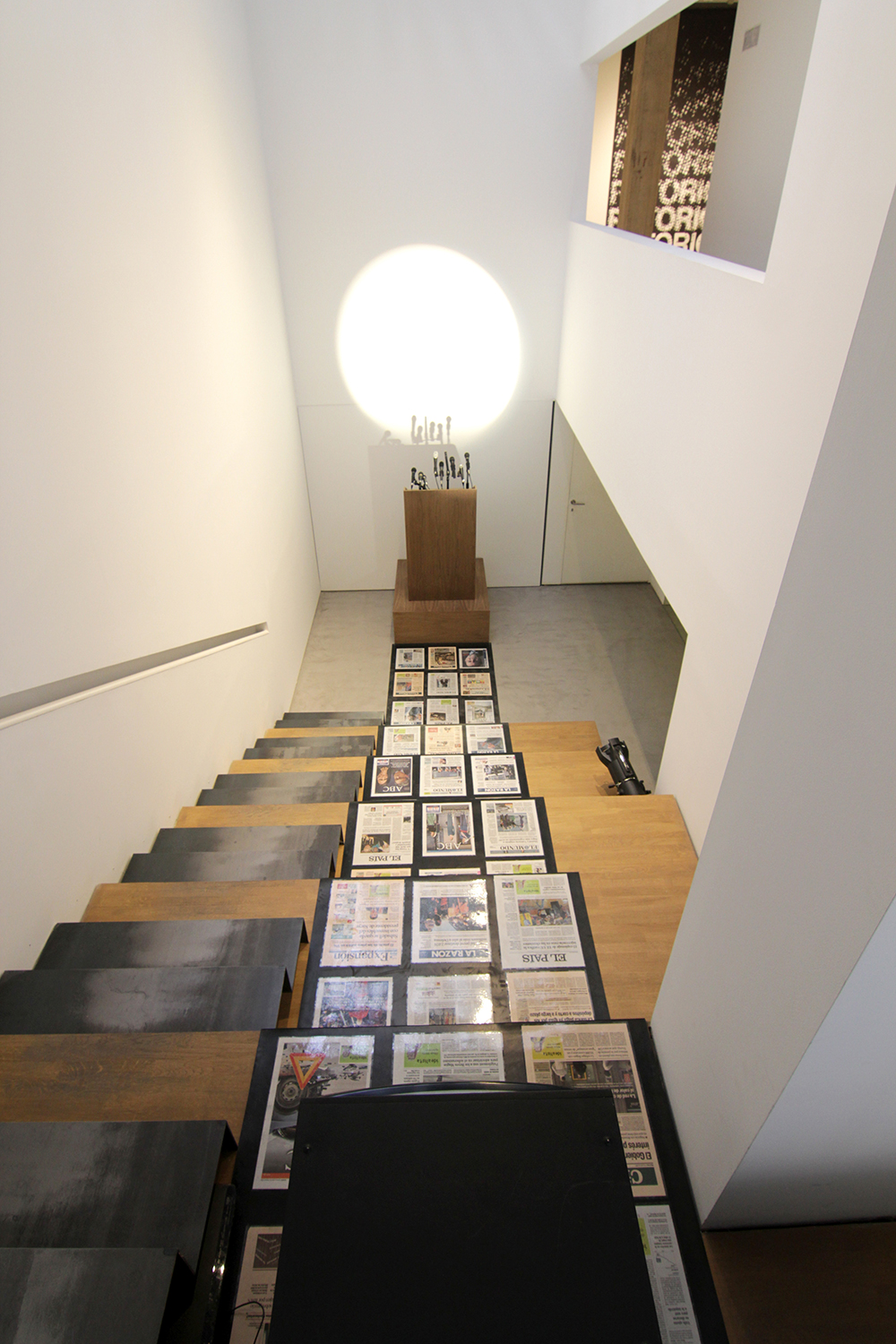 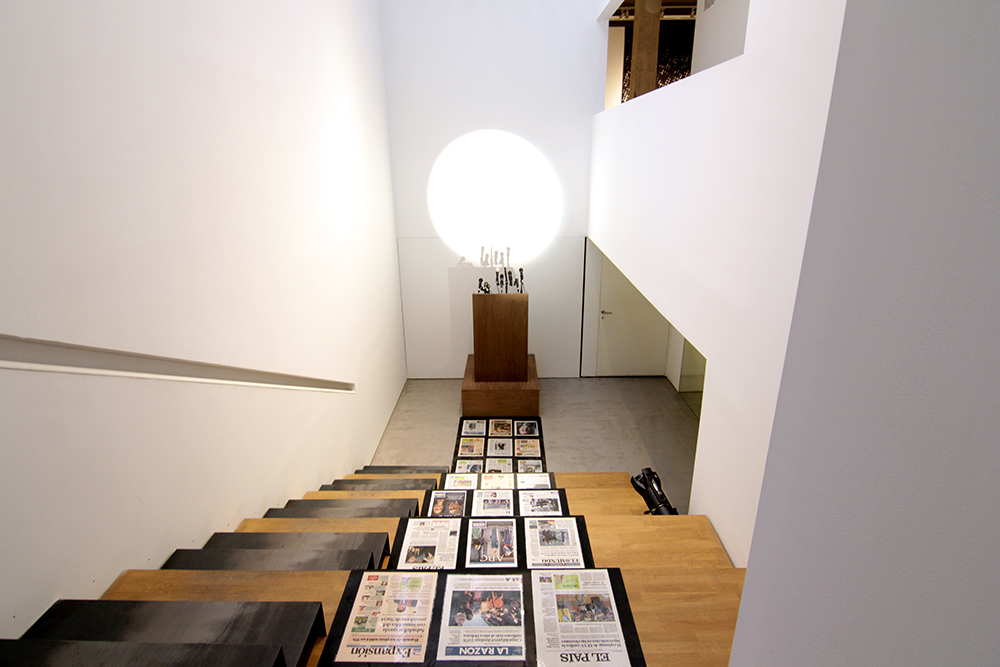 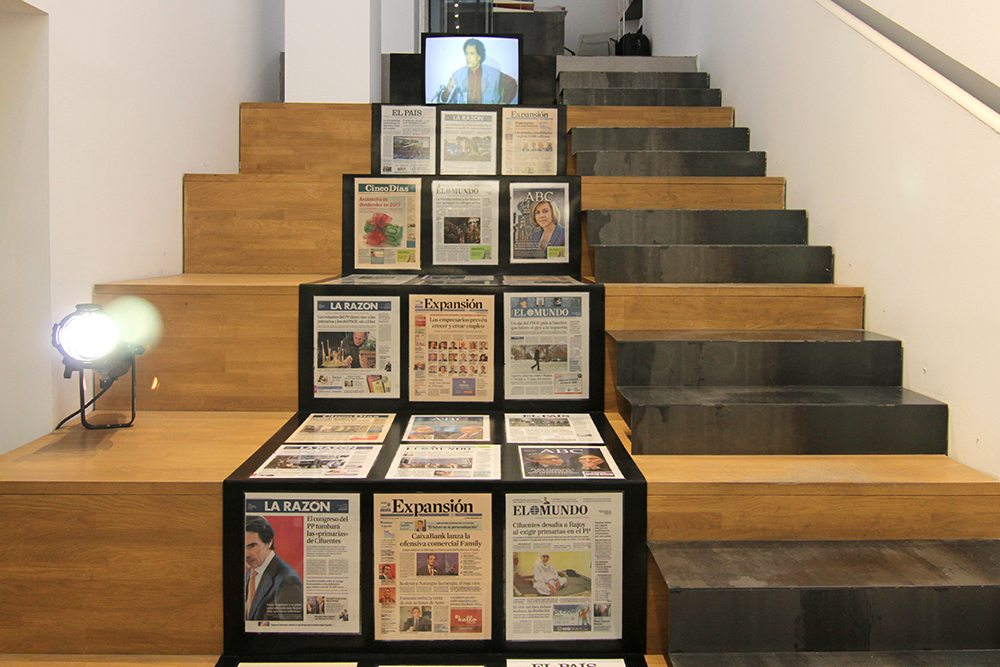 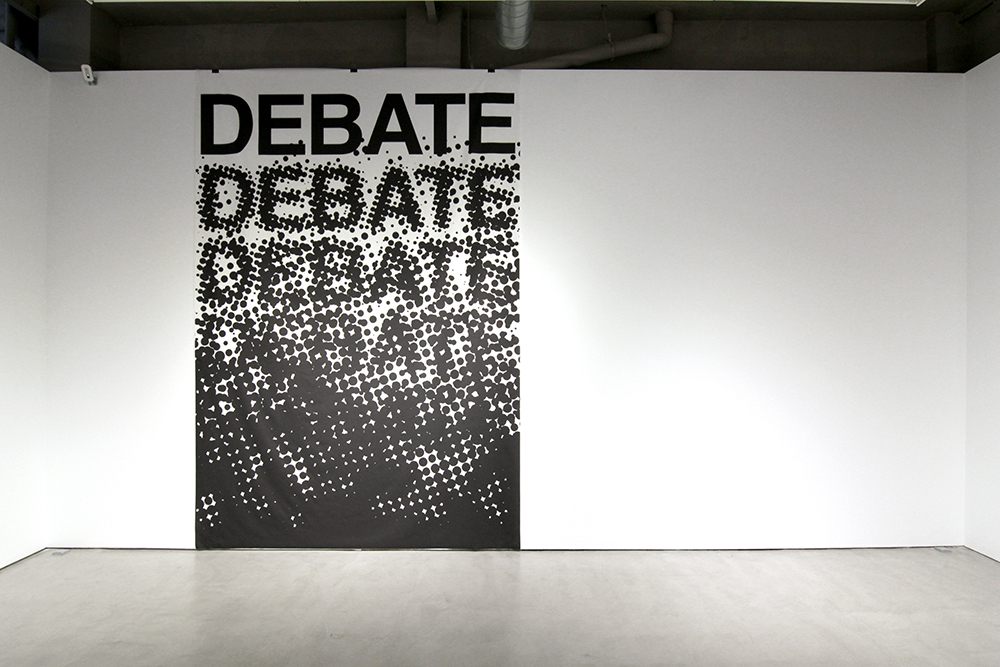 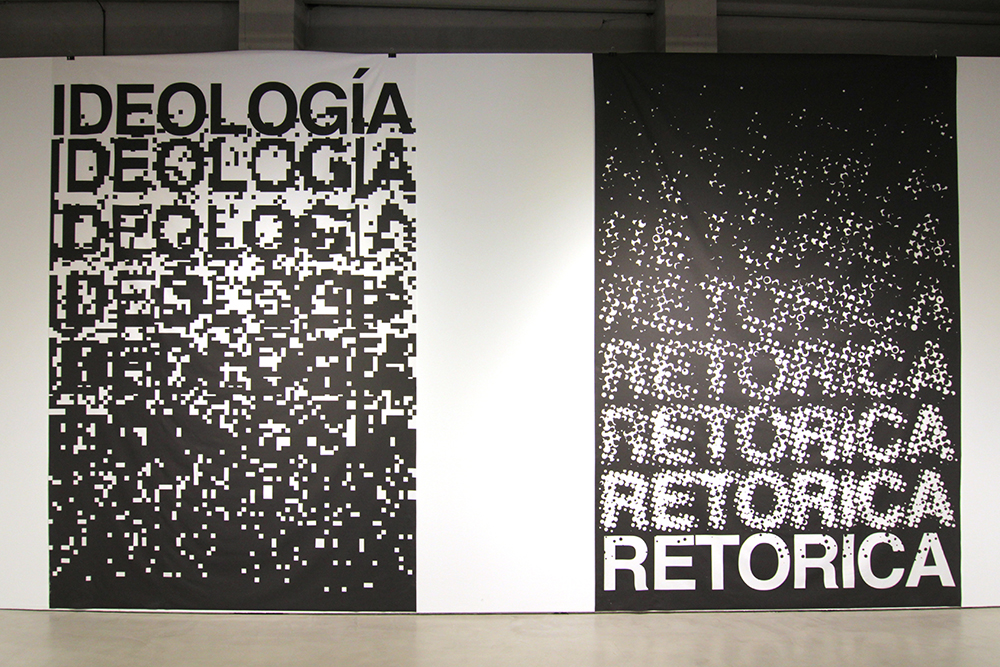 In Muntadas production, a series of works that address the redefinition of public space —through politics and the media—gains significance. Considered by many critics and philosophers to be a media landscape designer, here Muntadas delves into the construction of landscapes built upon power agreements that establish and demarcate a sense of common linguistic codes. We all draw from these communal territories to deal with reality. By selecting and processing the words that comprise this exhibit—a list which could certainly be dilated—Muntadas prompts a map of meanings, at times worn down, denigrated or disappearing altogether due to the use and abuse of power and mass media.

What value, what significance does the word transparency take on today? How many times must ideology be written before its myriad meanings will unfold? Moving through this landscape of islands in the form of words and meanings, Muntadas explores strategies that the linguistic uses suffer due to popular and media culture. Words that dissipate, words that to a lesser extent begin to belong to us, with a new consensus of meaning that sows the seed of a fresh masked reality. In some sense, this exhibition advances or encapsulates different works that the artist had worked on for more than 20 years: productions with hidden relationships between power and mass media. As such, one may feel removed from their own domains of communication, a stranger in their own house. Connections with past works of the artist can be found in España va bien (1999), We are fantastic (2005), Political Advertisement (1952-2016), On Traslation: Warning (1999-…), Media Ecology Ads (1982) o Projecte/Proyecto/Project (2007); these are productions that decontextualize certain sentences and words that occasionally occupy prominent positions within the official discourse of the media.

Three similar pieces are added to these new works, to these new words. In Architektur Raume Gester (1991), 6 mai 94 (1994) and The Press Conference Room (1991-2016), Muntadas unravels through images the ties that bind politics and hegemony in the mise-in-scène. References coalesce through the context of Words, words…, elements disclose the concealed mechanisms of power and mass media, turning public spaces into a controlled chaos.

Antoni Muntadas (Barcelona, 1942) has lived and worked in New York since 1971. Through his works he addresses social, political and communications issues such as the relationship between public and private space within social frameworks, and investigates channels of information and the ways in which they may be used to censor or promulgate ideas. His projects are presented in different media such as photography, video, publications, the Internet, installations, and urban interventions.

His most recent solo exhibitions include: Asian Protocols, the first part of which was held at the Total Museum of Contemporary Art in Seoul in 2014, followed by the opening of the present exhibition in Tokyo in March 2016, with a similar exhibition to be held in China in the near future; Audio Para Tres Instalaciones, Auditorium Parco della Musica, Rome, 2016; Dérive Veneziane, 72nd Venice Film Festival, 2015; En exhibición: Muntadas, Lugar a dudas, Cali, 2015; and About Academia, in the Carpenter Center for the Visual Arts en Harvard University, Cambridge (2011) that will subsequently be held at Arizona State University Museum and the American Academy in Roma, Italy.

His work has been exhibited in numerous museums, including MoMa, the Berkeley Art Museum, the Musée Contemporain de Montreal, the Museo Nacional Centro de Arte Reina Sofía in Madrid, the Museo de Arte Moderno in Buenos Aires, the Museu de Arte Moderna in Rio de Janeiro, and the Museu d’Art Contemporani in Barcelona. His work has been included in international events and venues such the VI and X editions of Documenta Kassel (1977, 1997), the Whitney Biennial of American Art (1991), the 51st Venice Biennial (2005), and others in São Paulo, Lyon, Taipei, Gwangju, and Havana.