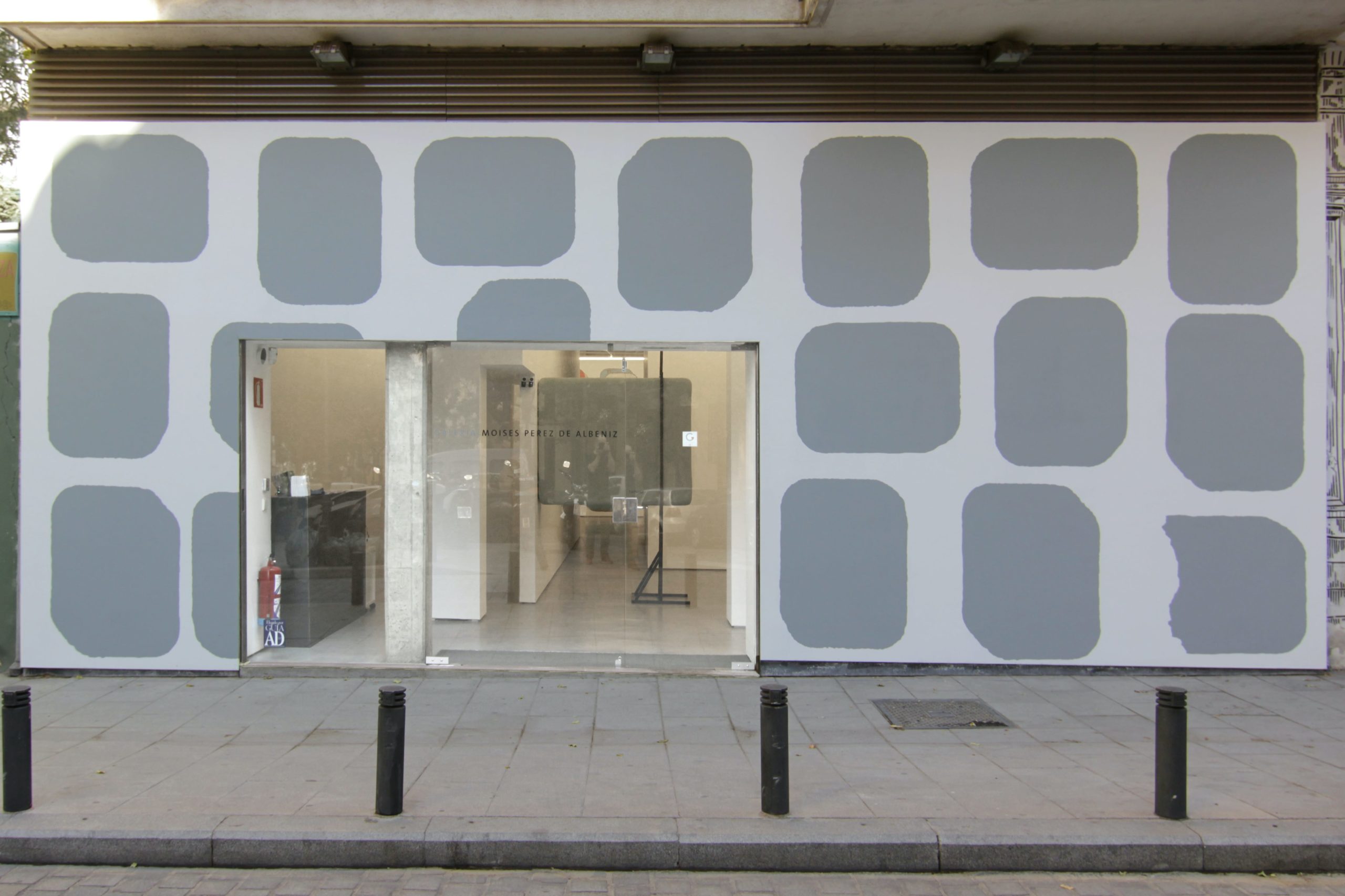 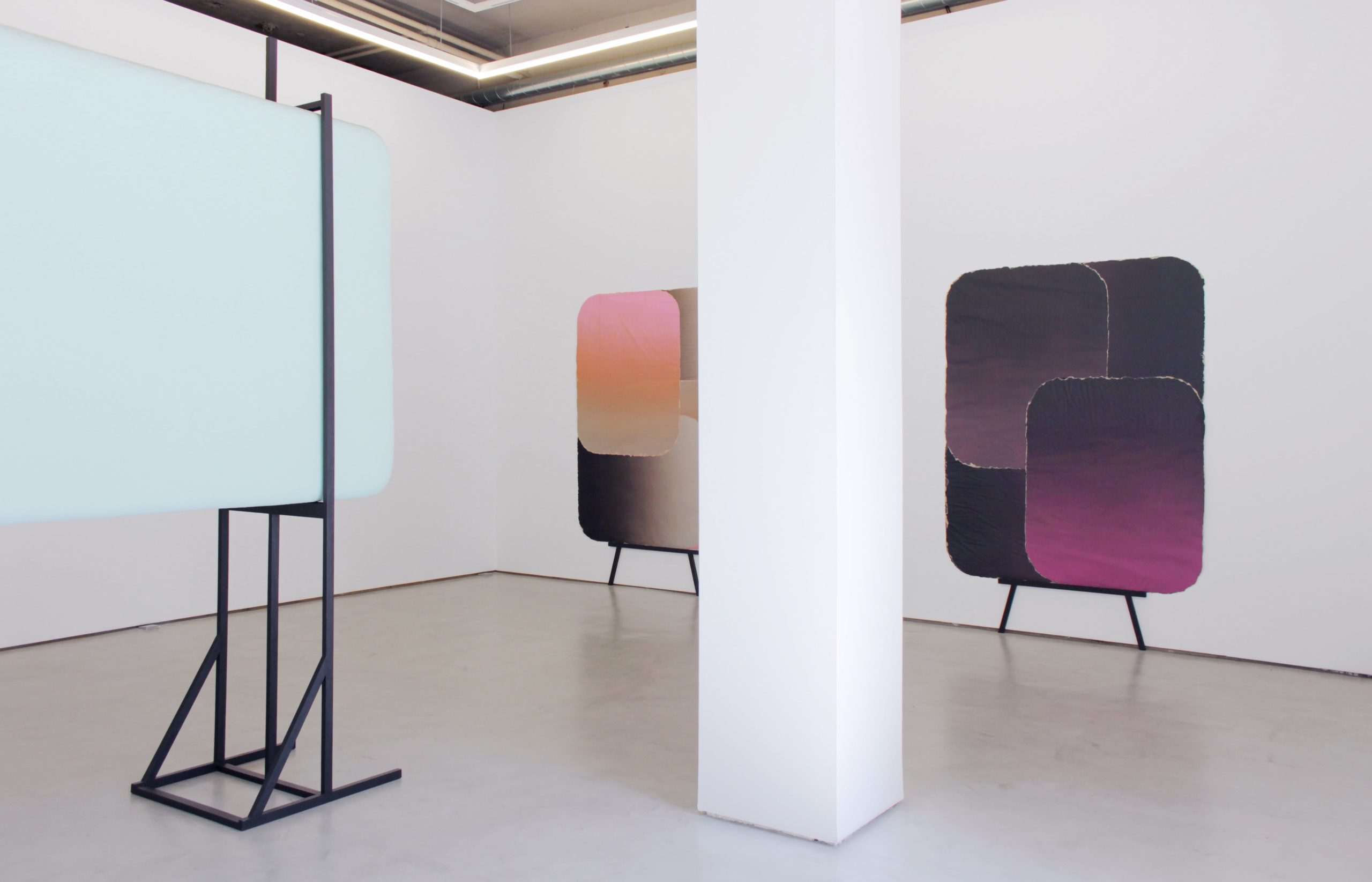 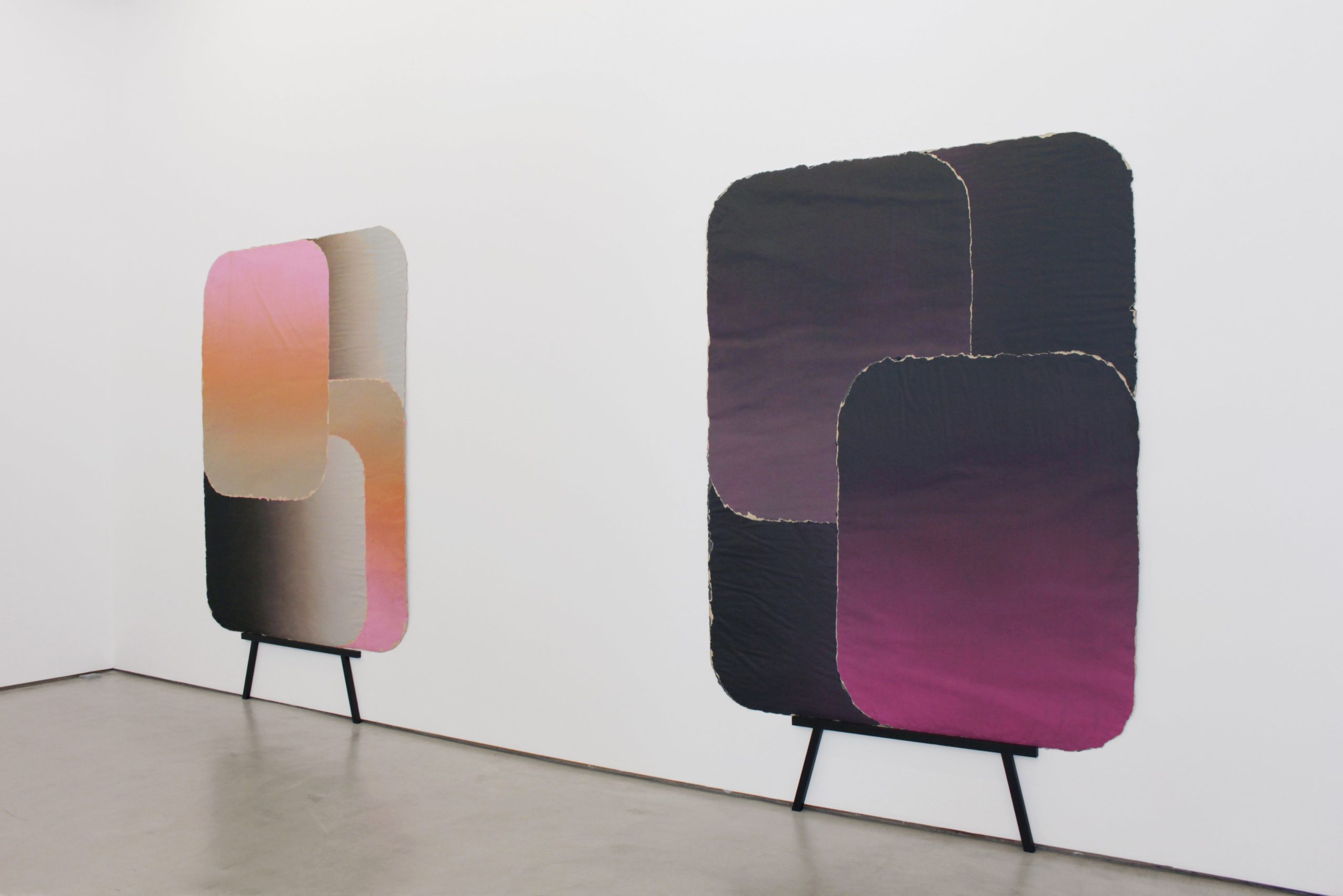 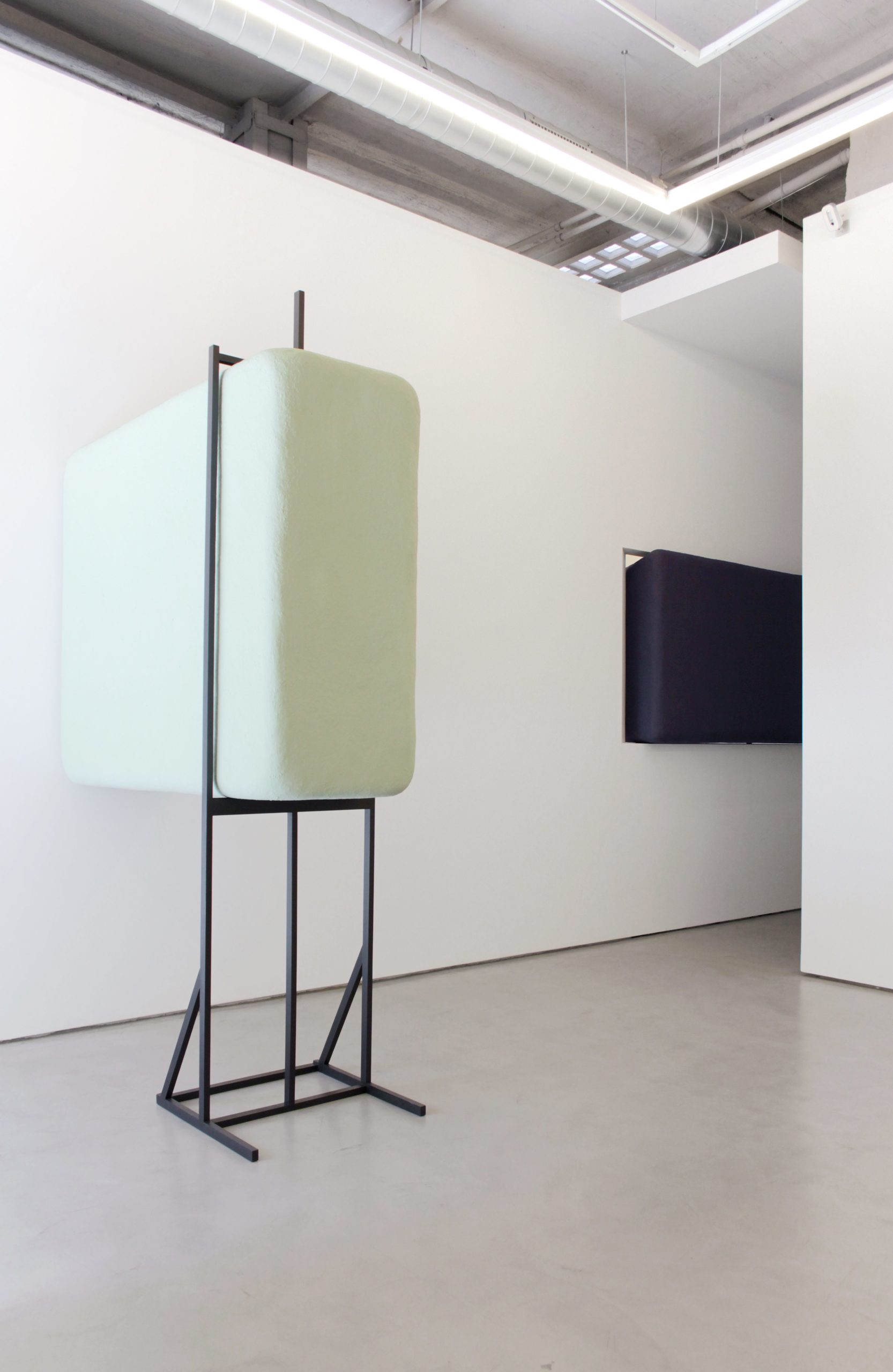 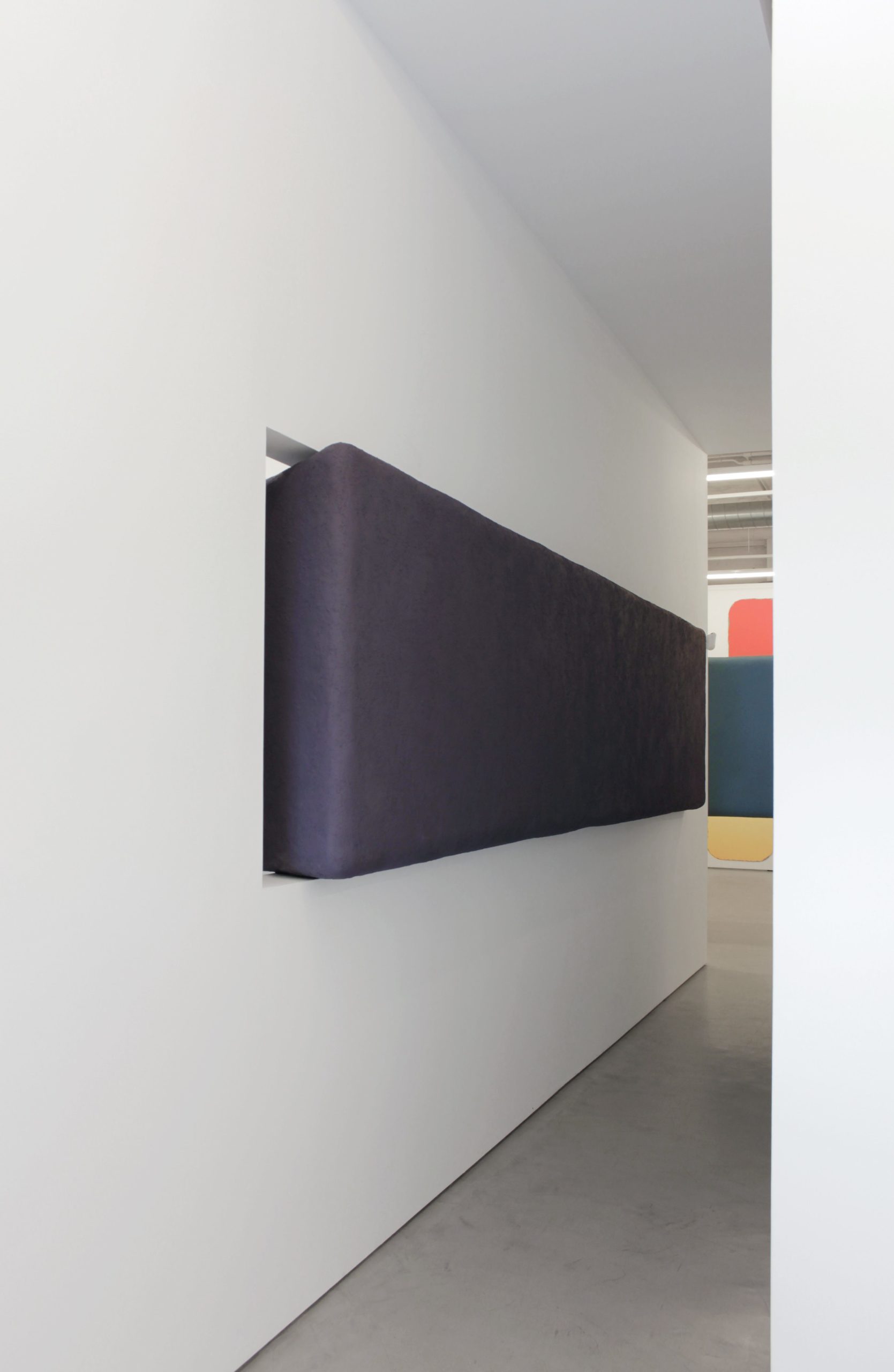 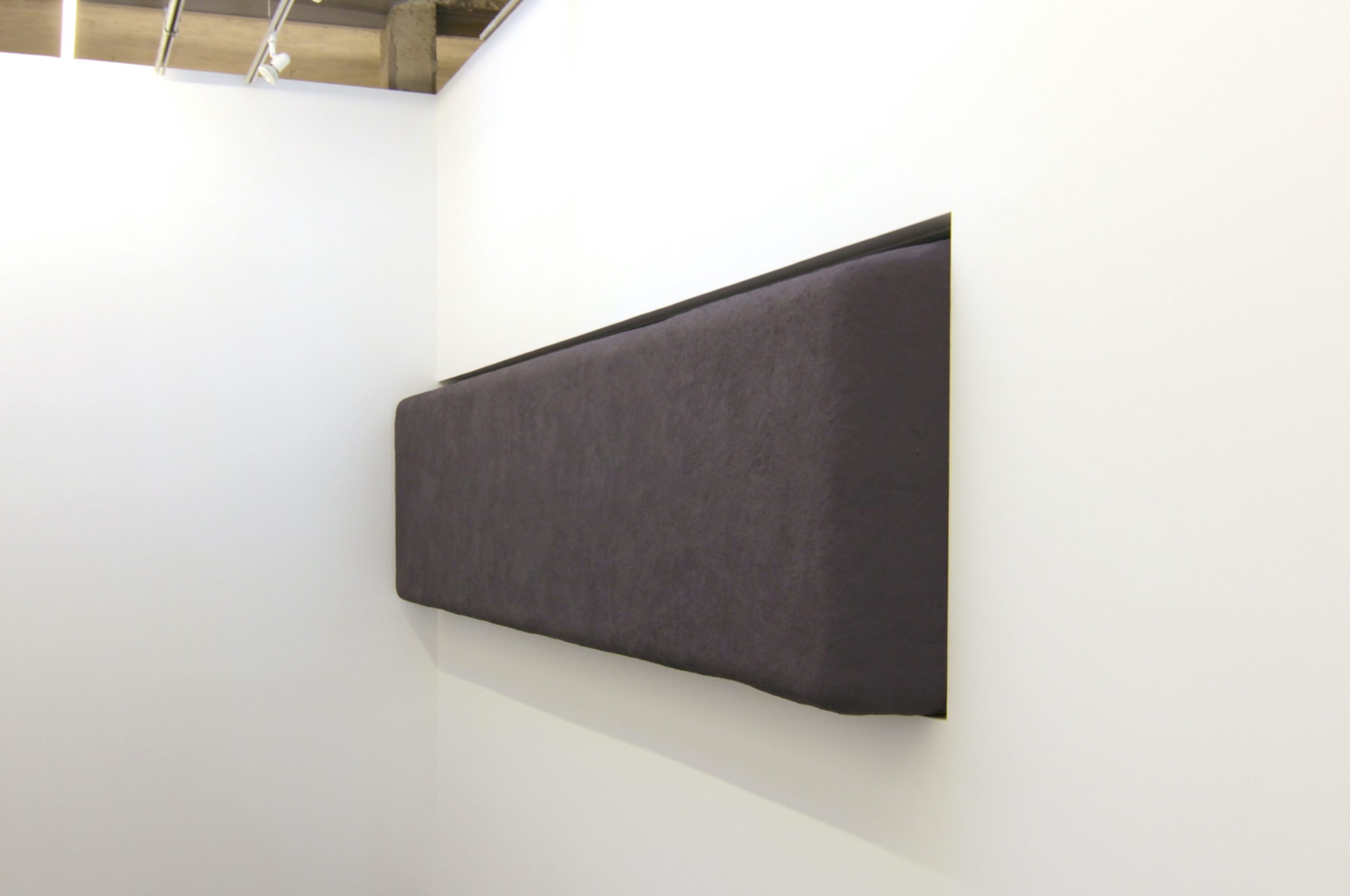 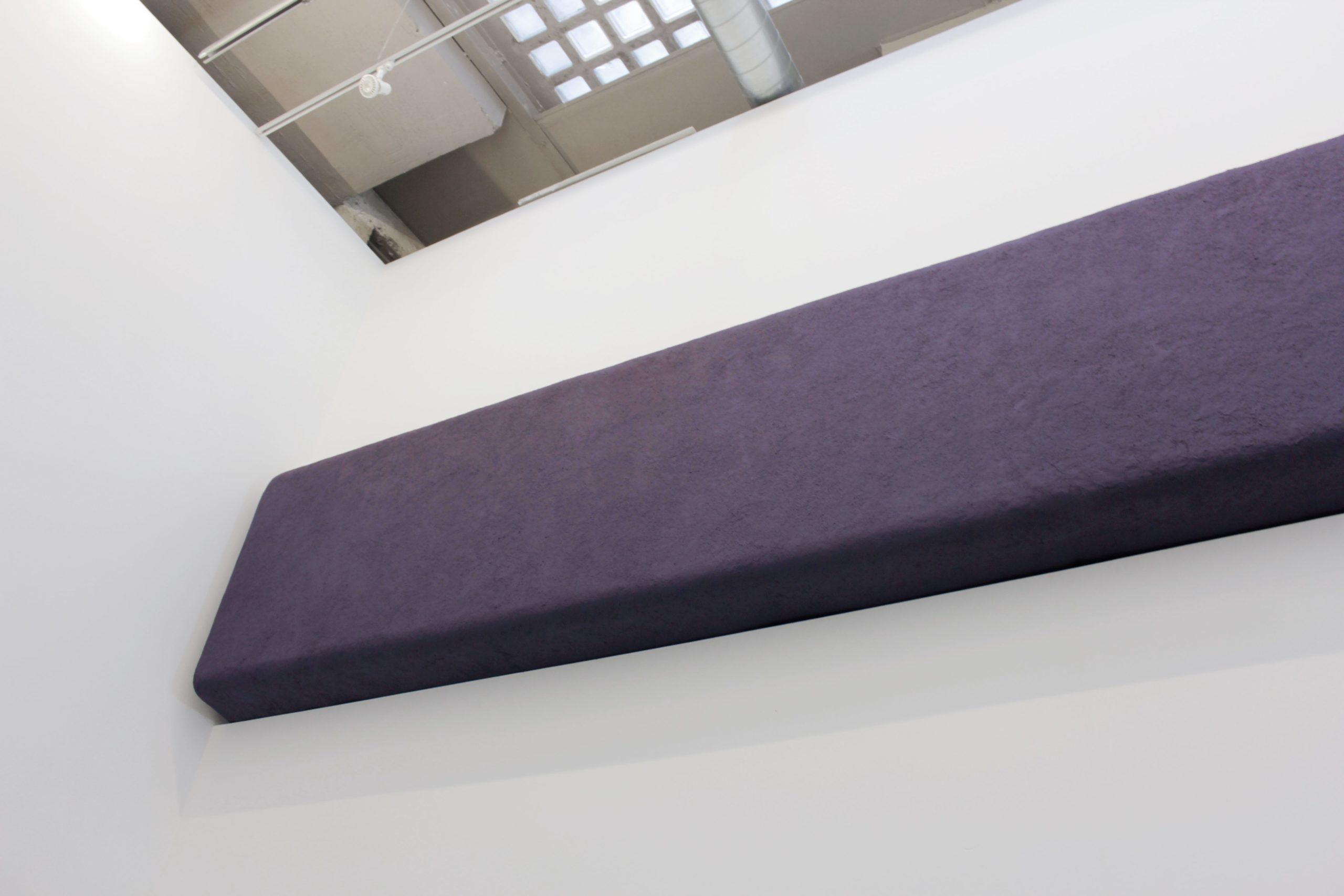 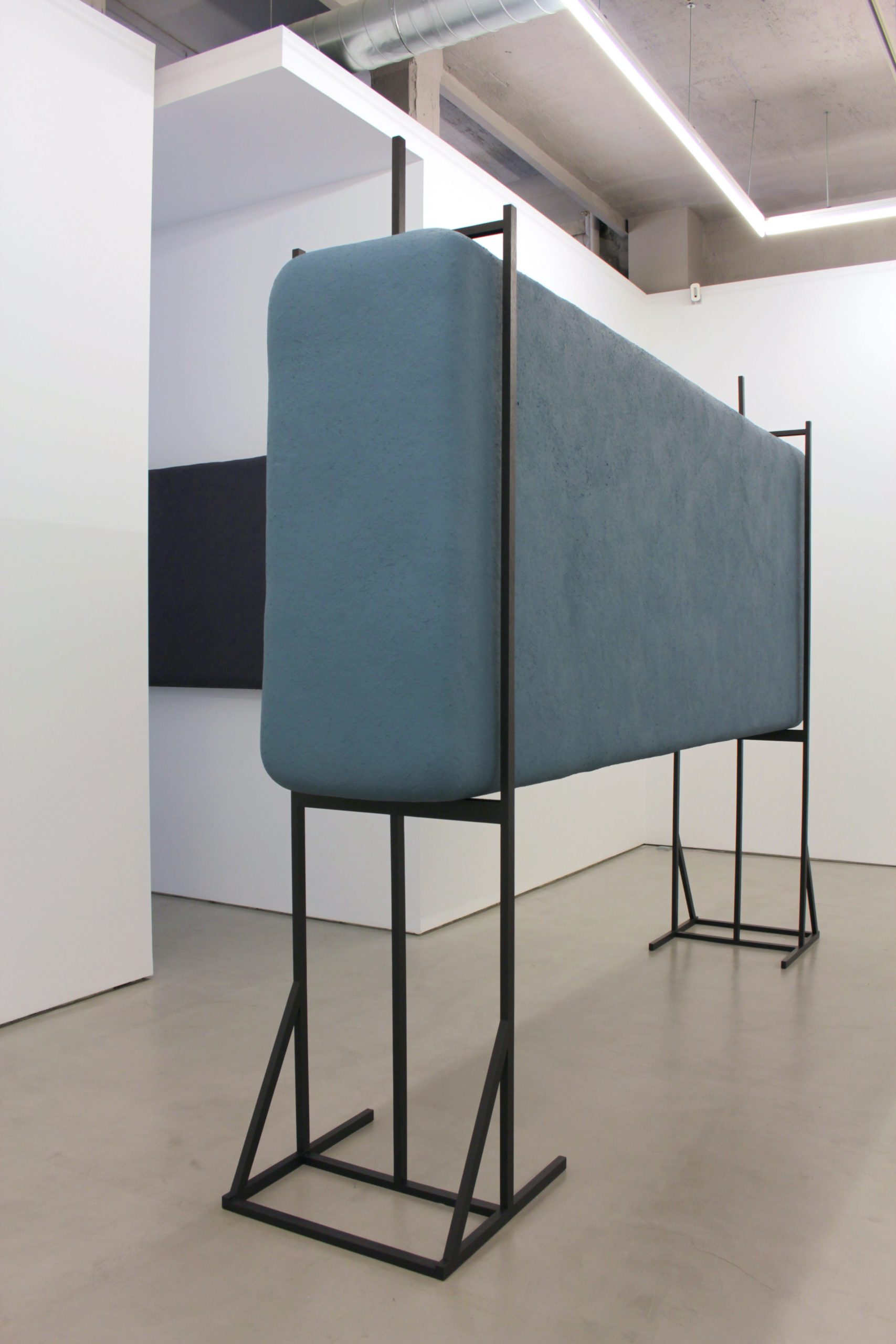 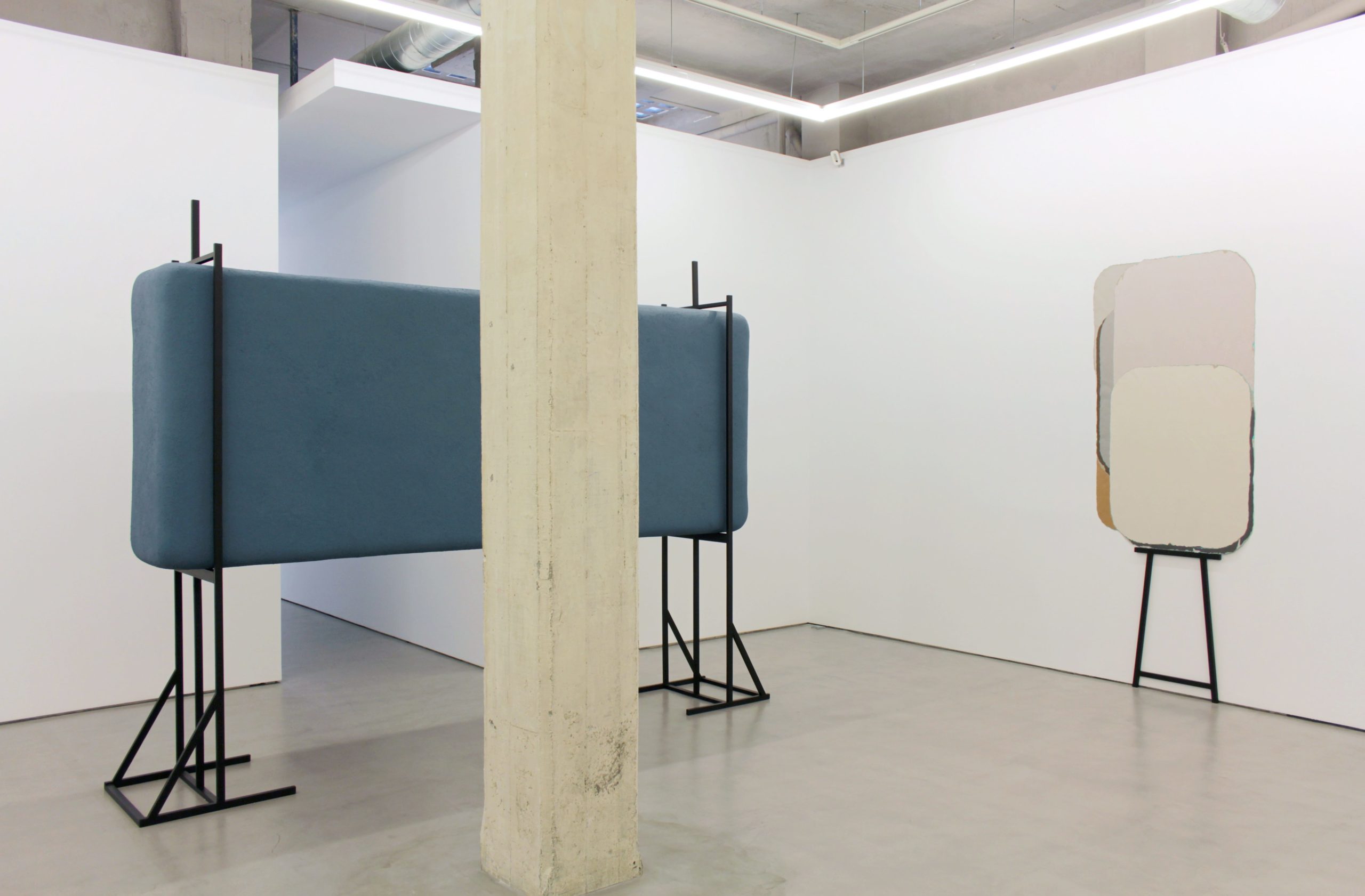 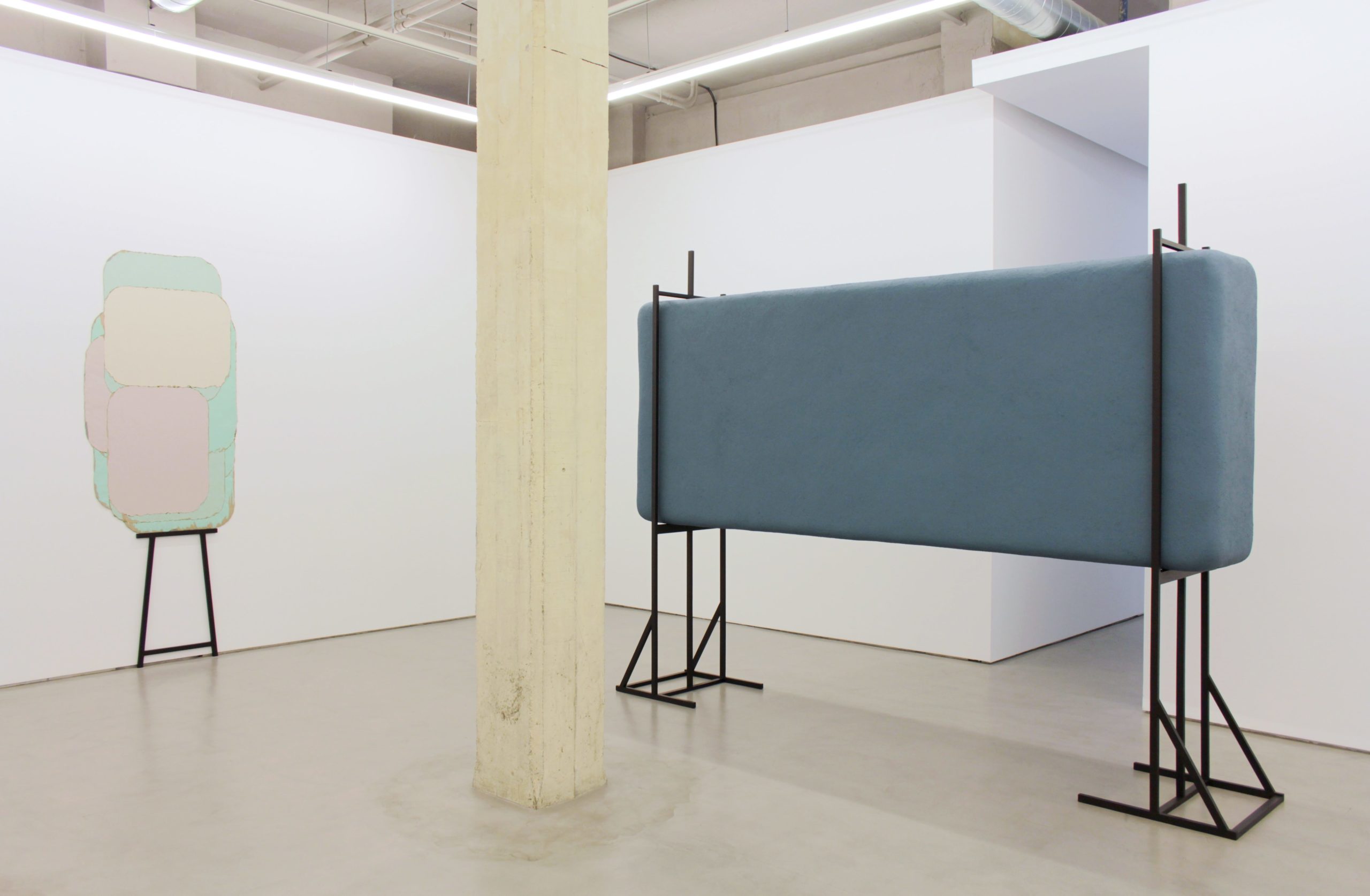 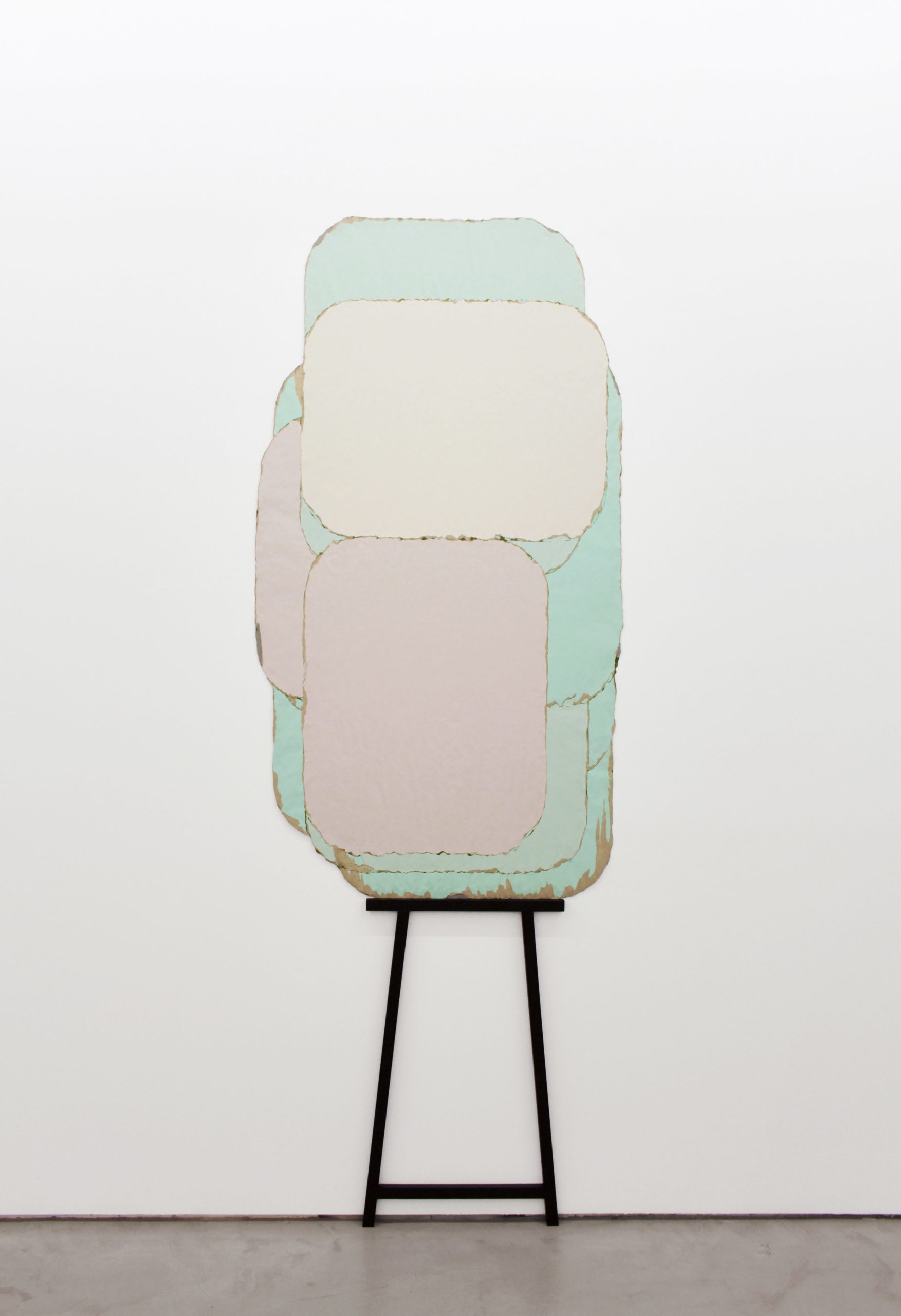 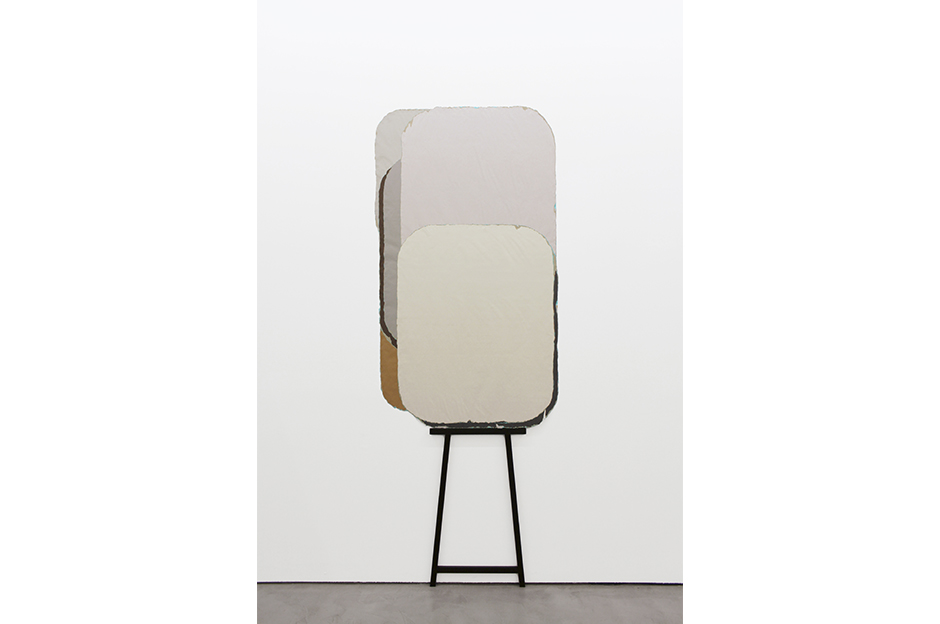 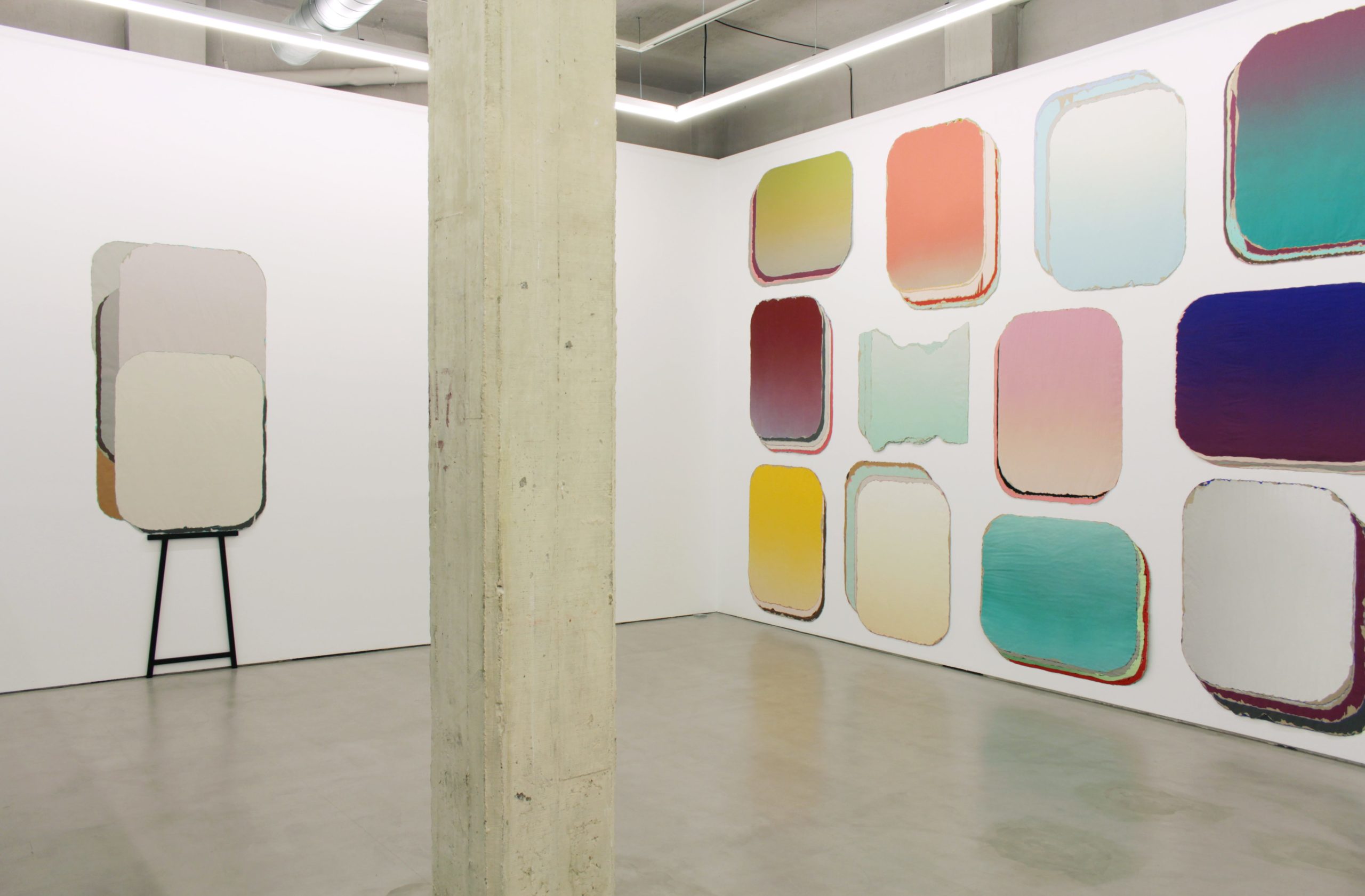 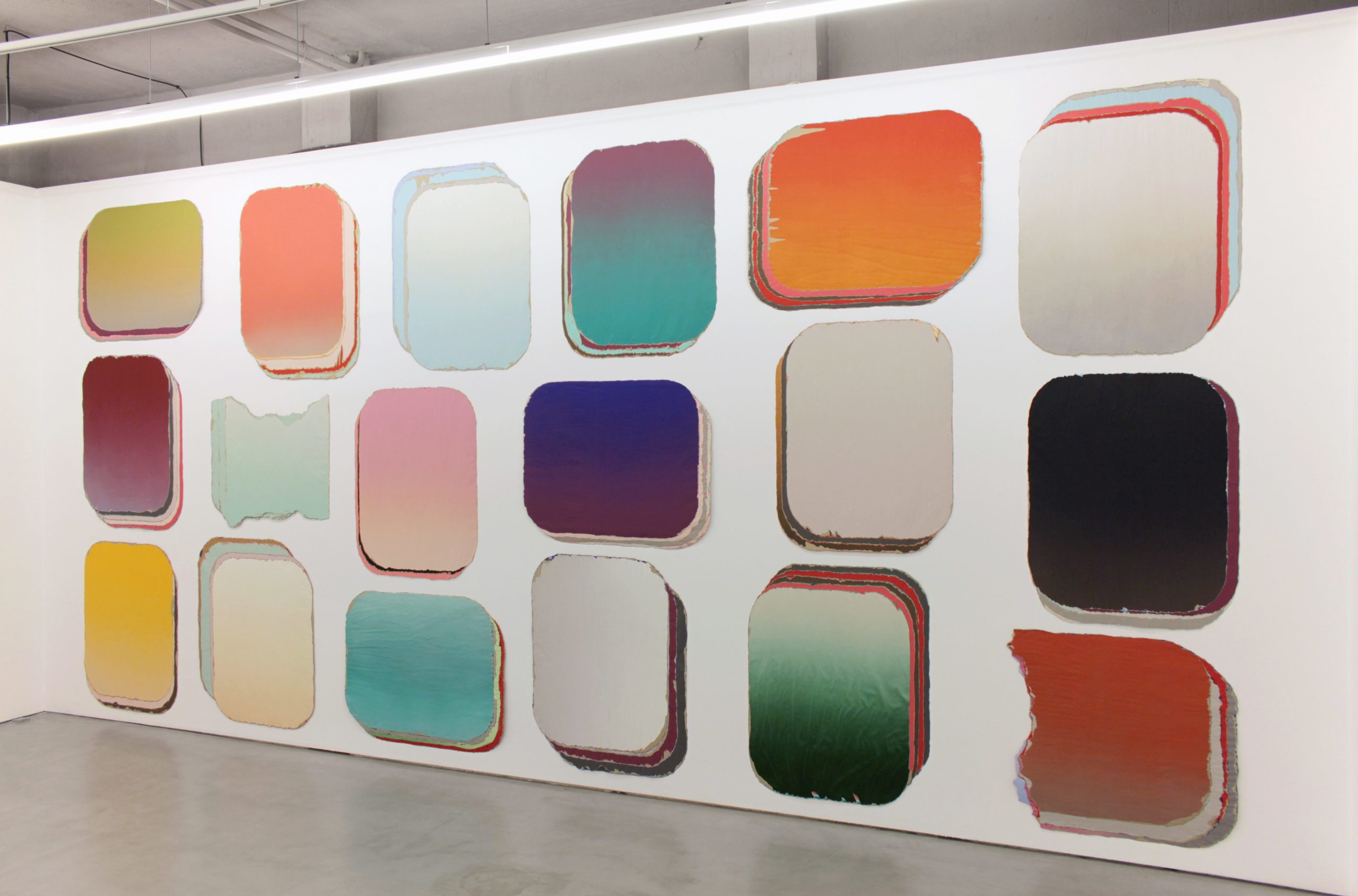 A series of grey figures on a white background.

A series of figures extracted from a white background.

A series of white figures on a grey background.

A rectangle with rounded edges, four rectangles, that go from one color to another, from purple to brown, from sky blue to white, from yellow to grey.

A rectangle with rounded edges that appears to be a background, a background that comes to the front, that opens out towards the horizon, that blocks a space. It doesn’t allow our view to go all the way back. Are they circular rectangles, or rectangular circles?

One on top of the other, and all around, above and in front. Interrupting, removing, coming forward.

Guillermo Mora’s work doesn’t symbolize a point between two disciplines. It isn’t an intermediary phase between painting and sculpture. And it cannot be understood in binary terms, as an object trapped in a comparative position between two categories that we understand easily. Rather, Guillermo’s work is more a mechanism than an object. An unstable, elusive mechanism that is constantly changing. More like an epidemic that starts with contact, progresses with contagion between two entities, and produces elements that are always changing, always converting into something else. A color that is never pure, but instead is always becoming another tone. Color is felt, but impulse is felt too. The material speaks. A mass of synthetic paint that expands, dries up and cracks. But it is never contained, and its expansion keeps happening before us at an almost imperceptible, incontrolable scale.

Guillermo’s work is also abstract. It’s a body of work where the planes of color, gradations, volumes, interactions, textures, absences and presences are formal elements with which the artist defines his language. This language is situated in a historical moment where it is possible to trace a trajectory in which abstract art has surpassed the conditions of modernist vestiges, or of amateur decorative practices, and that in recent years has returned. In this sense Guillermo is also not composed as an individual entity. He is the result of a multiplicity of voices: the utopic protests of early abstractionists like Kandinsky, Malevich and Mondrian; Felix Gonzalez-Torres’s faith in the political potential of abstraction to penetrate our existence; even more contemporary artists, like Ulrike Müller who utilize abstraction to discuss questions about feminist practices in relation to the body and the identity politics of today, or Alan Ruiz, who seeks to find a new radicalism and renewed capacities within formalist art. At the same time, this interest has surpassed the figure of the artist. There are cases like that of the curator Maria Lind, who through a research project called “Abstract Possible” investigated formal abstraction in relation to what she calls “strategies of withdrawal”, retaking the Latin etymology of the word abstraction (Abstrahere) and relating it with verbs and actions like retreat, remove, or extract.

It’s precisely within this historical and theoretical frame that Guillermo composes a series of complementary, symbiotic and hybrid works that are thought of in relation to what they are, to what they are for the other, for the space, and for their specific context. Through the title of the exhibition “The Depths Come Out,” Guillermo uses language as a narrative trick that plays with different levels and hides a complicated web of symbolisms tied to his interest in challenging and revealing the obsolescence of a world of definitions and rules. “The Depths Come Out” breaks with a simple premise “to pass before what is behind,” which the artist himself describes as “a not only physical positioning, but also a symbolic one.” This movement signifies a literal attempt to invert the logic of the planes of color, the farthest plane, to being the first, obstructing the content that potentially could exist behind. While in this reciprocal process, what is behind becomes what blocks other content, and what matters. At the same time, the artist deploys this strategy in the space – the facade of the gallery is dressed with extracted figures, and the inside of the gallery is blocked off in unusual places in an evident effort to shake the spectator of all preconceptions that she has brought with her to the space, and to shake the space itself of the common form which exhibitions normally take.

“The Depths Come Out” also takes advantage of the ironic and ludic possibilities of its own title as a vehicle to make a critique of local institutionality, thinking about the word “depth” in terms of objects of museum heritage, and of economic resources in the case of private collections and of the recent ups and downs of the Spanish economy and its impact on the local art ecosystem. The mode of operation that continues taking charge of concentric systems, always growing wider – to the self referentiality of the work of art, to the gallery as a system, to the system of galleries in a city, and to the forms in which the city constitutes an art system – is perhaps one of the most identifiable modalities in Guillermo’s work. At a moment when production and the content of images is becoming increasingly frenetic and complicated, the process of deacceleration or suspension of image is a radicalizing act that goes against notions of utility or productivity.

That is the coming forward part of the work, and of Guillermo. The new energies that the artist presents in himself, in his work and in the space are separated from what is predictable, and reveal a choreography, and a continual process of negotiation between various entities that are made and remade as we look at them, surround them, or inhabit them.